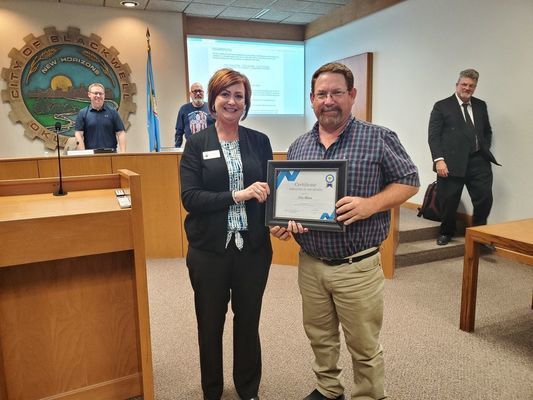 The Blackwell City Council met last Thursday, and for a second time there was a proposed Executive Session item to discuss a ‘Performance Review’ for City Manager Janet Smith. And, as before the item to discuss the CM’s performance was met with silence and the motion died.

The meeting began with the Employee of the Month recognition of Jim Hoos, Water and Wastewater Department Manager, for all the efforts to keep the city in line with all of DEQ’s recommendations. High marks were given by DEQ in last month’s Water Survey submitted to the city.

The start of the actual items of business began with the approval of transferring the items declared “Surplus” by the Council. Vehicles no longer needed by the department were donated to Pioneer Tech for teaching and to the Kildare Fire Department.

The third item was the approval of Ordinance 2020-06 “Reporting of Contagious Diseases” which would fine any health official or department an upwards of $500 for not reporting any contagious illnesses to within 6 days to the County Health Department. Councilman Beliel commented that this ordinance would assist First Responders in knowing if any health concerns were present when they arrived on a scene. The ordinance passed with an emergency clause included so that it takes effect immediately.

The next item discussed was concerning the rates of the Fairground Facilities. There was an item placed before the Council on 1/19/2017, right after the opening of the Event Center, but the item was tabled. Since that time city administration have used a suggested sheet of pricing for rental of the facilities. This ordinance now sets the pricing for non-profits and for normal use. Permission was also granted to the City Manager to make adjustments to the rates of the Fairground facilities like the Event Center on a case-to-case basis for the promotion of tourism and general usage of the complexes. This ordinance was passed and included an emergency clause so that pricing can be effective immediately.

The following item requested council approval of an agreement between Blackwell Animal Control and the Oklahoma State University Veterinary Clinical Services for the spaying and neutering services and other medical/surgical care as needed on Blackwell's shelter animals. The initial setup funding will come from donated funds given to the BAC, but the ongoing expense of the program will come from adoptions that will include the cost of any services performed on the animals.

Code Enforcement Officer Jerry Wieland then approached the City Council, as they approved the seeking of bids for mowing, funded by the Blackwell Public Trust Community Enhancement Fund. Council approved going out for bids for mowing.

The Council meeting was recessed and the Municipal Authority convened to consider awarding bids for Sanitary Sewer Maintenance. Approved were four tasks for a total cost of $571,487.00 to Nowak Construction Company. Phil Briggs from Cowan Engineering provided the bid tabulations and made the recommendation based upon directives given by ODEQ and city staff for the projects.

Finally the City reconvened, and the Council reached the proposed Executive Session which would see discussion regarding property related issues, such as Lake Blackwell , gymnasium, landfill, downtown property for business incubation, and downtown parking. Included in the list of proposed items was a ‘Performance Review’ of City Manager Janet Smith.

Councilman Webb moved to convene the Executive Session. When met with silence, Mayor Greenfield then gave a second and called for the vote. Two votes for yes were from Webb and Greenfield. Vice Mayor Marquardt voted no. Councilman Beliel voted no. The motion died for lack of a majority of votes either way. Afterwards, Councilman Webb echoed his statement from the last meeting where the item to convene an executive session to discuss the performance of the city manager failed, and said, “if you guys do not speak up you're not doing your job.”

The meeting adjourned without convening the executive session.