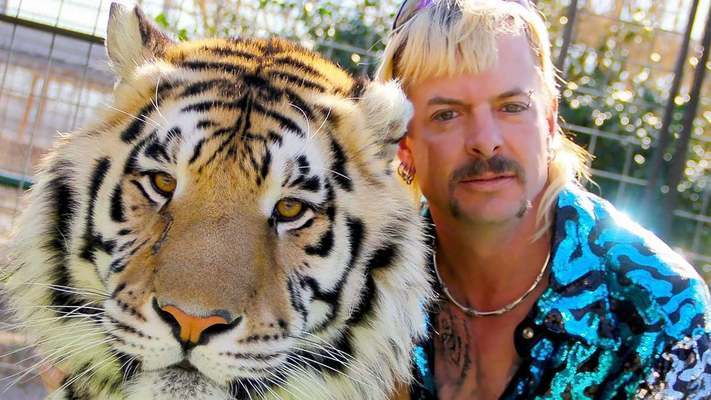 “I refuse to wear a suit. I am gay- I've had two boyfriends most of my life- I've had kinky sex, I've tried drugs through most of the younger years of my life. I'm broke as sh**, I have a judgement against me from some b**** down there in Florida...”

This comes from the 2016 Presidential Campaign video for Joe Exotic, the subject on Netflix's whirlwind documentary series “TIGER KING” which debuted last week. Unless you've been living under a rock in your quarantine shelter, you can't have missed it.

Joe Exotic is a gay, polygamist, cowboy, country singer, zoo-owner who was twisted up in a murder-for-hire plot against a rival of his, operating a separate tiger zoo in Florida. This sequin casanova famously ran the Greater Wynnewood Exotic Animal Park in southern Oklahoma which is where most of this action takes place, and proves exactly why we love Oklahoma...and also asks, maybe more importantly... what “is” our identity?

One quote perhaps best sets up the presence of Joe Exotic: “He was like a mythical character living out in the middle of bumf*** Oklahoma who owned 1200 tigers and lions and bears and sh**.”

At one point Joe Exotic (sporting his platinum blonde mullet, handle-bar mustache, six-shooter slung around his waist, and wearing a purple plaid shirt) rides up on an ATV just off the interstate to see a gigantic, grizzly, tornado making it's way across the heartland in the distance. Joe turns with authority and assures the audience “that's a real life tornado...and there ain't nothin you can do.”

That, right there, is Oklahoma

This 7-episode series is an absolute mind boggling odyssey that can't be described or explained. Trust me, just watch it.

It's oddly sympathetic, and while Joe wasn't exactly a rational person, or maybe even a good one, you can really tell the docu-series takes an objective approach to his involvement in the attempted assassination of Carole Baskin, and allows the audience to interpret who may or may not be telling the truth. I laughed, I cringed, and by the end I gained some sort of...twisted respect and sympathy for Joe.

We are all flamboyant, ridiculous, cowboys that wear the most obnoxious parts of “Okie” culture like a badge of honor, through irony or through sincerity. I've met people who can wear pea coats and slick their hair back in the winter as they fluff their scarf, order an old-fashioned, and hit thousands of dollars at a hand of poker and then, weeks later, turn right around in camo shorts, a Budweiser cut-off tee, and a nearly buzzed head and go “catch river monsters” while drinking beer at 4 in the afternoon on a buddy's rinky-dink boat.

There's a “Pioneer Woman” Oklahoma, a “Twister” Oklahoma, an “August Osage County” Oklahoma, and now a “Joe Exotic” Oklahoma...but there truth is, they're all the same state. We're all just Joe Exotics at heart, and I think instead of trying to deny the culture and spotlight this Netflix series is shining on our state, we should embrace it. Own it. Be weird as Hell. Seduce people with bags of meth. Write country music songs about tiger cubs. Why not? We're only here once.