Local beekeeper says to be mindful of swarms this Spring 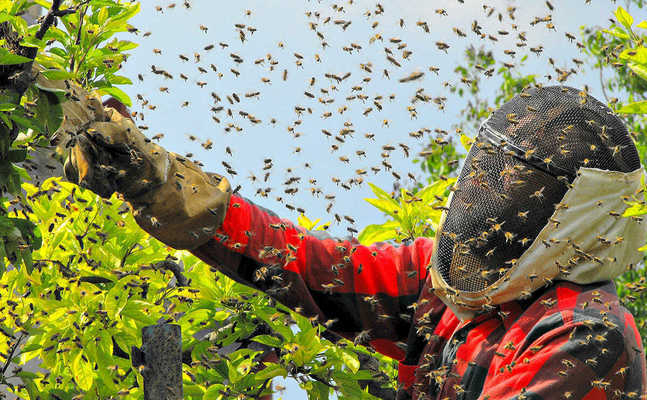 As the days get longer and the temperatures get warmer, honeybee activities begin to increase as they prepare for the spring nectar flows. The bees are now beginning to build up their populations in order to have enough worker bees to gather the nectar. As the populations build up, some bee colonies increase their numbers very quickly and some individual hives may become overcrowded. The overcrowded conditions can stimulate a phenomenon call “swarming”

Swarming is part of the reproductive cycle in honeybees. Though honeybees reproduce individual bees through mating and egg-laying, swarming is how honeybees create new colonies. The process of swarming involves production of a new queen within an individual colony. When this queen emerges and is ready to take on the duties of a queen bee, the old queen (the new queen is now the queen of the old hive), along with approximately one-half of the workers in that colony, will leave the hive as a large mass of bees. This mass of bees will congregate on a tree limb, fence post or on a side of a building near the original hive. A congregation of bees in this manner is called a swarm. (Some colonies will swarm several times, so some of these swarms will have new queens.)

While the bees are in this swarm, some workers are sent out to search for a suitable place to start a new hive. We call these particular workers “scouts”. When some of the “scouts” have found a favorable site for a new hive (such as a hollow tree), the report back to the swarm and then the swarm leaves the swarming site to go to the new hive.

Some of you may have the opportunity to find a swarm this spring. You may find a clump of bees that can range from the size of a softball to as large, or larger than a basketball. You may find them on a tree limb, in a shrub, on a fence post or on the side of a building. If you find a swarm, the best thing that you can do is leave it alone. Honeybees, which are in a swarm, are not aggressive because they have no hive to defend at this time. These bees, however, should only be handled by an experienced beekeeper.

Swarms may stay on a swarming site for as little as 15 minutes or for several days or more. It depends on the length of time it takes for the scouts to find a new hive. So, when you see a swarm, keep in mind that they will not be on that site permanently.

Spraying honeybee swarms with insecticide is not recommended for several reasons. First of all, even though the bees are not aggressive during swarming, you run the risk of getting stung if you try to spray them. Secondly, the bees are only going to be there for a short period of time, so spraying them will be a waste of your time. Finally, if the swarm is reachable, the bees are valuable to a beekeeper. If a swarm is found before it locates a new home, a beekeeper can capture the swarm and start a new hive with the bees.

If you come across a swarm call John Lucas, local beekeeper, and he will be more than glad to come remove the bees for free. He can be reached at 580-670-0928.