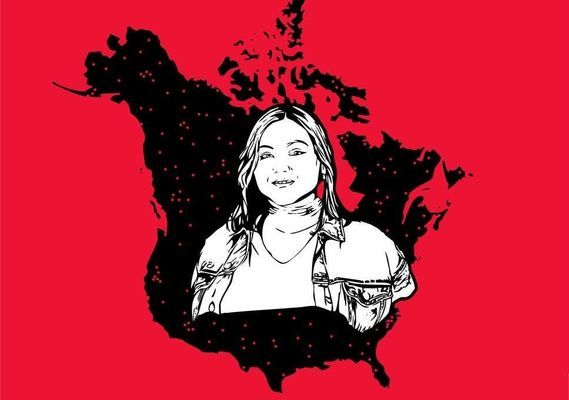 You recognize the hand prints across their mouths, in bright red or dark black, to represent the voiceless. Their dresses hang from trees. They symbolize a statistic that can't even be properly recorded.

Oklahoma currently sits in the Top 10 for states with the highest number of missing and murdered indigenous women and girls with 18 cases, per a study released in January 2019 from the Urban Indian Health Institute.

On May 5, 2020, a Ponca City-based group called the Missing and Murdered Indigenous People of Northern OK- Indian Territory became the tenth chapter of its kind in Oklahoma.

It serves the Ponca, Tonkawa, Pawnee, Kaw, Osage, Otoe-Missouria, Iowa, and Delaware tribes, as well as the family members of missing and murdered indigenous people in their territories. Vivian Billy is president of the group. For her – and the men and women she works with – they are the last resort, and their work is solemn, spiritual, sacred, and sadly necessary.

“We put our hearts and minds together, and our lives on the line to confront the institutions that have targeted us,” she said in her group's mission statement. “We are 'mocc’s on the ground' and ever-vigilant in stepping up to protect each other, and help those who are grieving over their missing or murdered relative or loved one.”

The group was started in 2019 to aide in the investigation of Joshua Battiest and to later assist with the search for Sheila Strong.

Like many others, Billy said that her work really began in 2016 in Standing Rock.

“After I returned to Ponca and saw that Joshua was missing – someone from my home – I took action,” Billy said. “The law doesn't search. They interview, provide evidence, point in the right direction, but they don't actively search. That's a grass-roots operation, and that's what organizations like ours do.”

A report by the UIHI in 2016 showed that 5,712 cases of missing and murdered women and girls were reported in the U.S. Only 116 of them were logged by the Department of Justice.

Out of 506 cases through 71 urban areas, the median age of victims was 29. Of those cases, 280 were murders, and 128 were missing person cases. Ninety-eight were “unknown.”

The UIHI identified 96 cases that were tied to broader issues such as domestic violence, sexual assault, police brutality, and a lack of safety for sex workers.

“Oklahoma’s location makes the state optimal for human trafficking,” Billy said. “Oklahoma is located in the center of the United States, where the intersections of major highways, such as I-40, I-44, and I-35, create a choice route for traffickers. Because traffickers typically prey on women who have lower education and fewer resources, Oklahoma became a prime target for seeking out women for commercial sex purposes.”

“Oklahoma ranks first in the nation in female incarceration and child abuse deaths, third in divorce, and fifth in teen pregnancy,” she added. “These statistics portray many Oklahoma women as vulnerable and susceptible to the business of commercial sex, given that these statistics correlate with the 'risk factors' previously identified.”

These statistics have led organizations dealing with missing and murdered women to be born from desperation.

“We don't have a perfect system, and there isn't one in place for indigenous peoples, but steps are being taken,” Billy said. “We have knowledge, we have databases. We work closely with local tribes and their domestic violence programs. We work hard across the internet with social media to distribute information. We're coming up with systems and ways not only to be informed, but to stay that way. To update information, to update people.”

Extortion, Billy says, is a terrifying reality for most families who are simply looking for their loved ones. It's a reality that she and MMIP of Northern OK are dedicated to reshaping. “We keep an eye out for flyers, for families that might be innocently posting about someone being missing, but haven't contacted an organization like ours or authorities,” Billy said.

“We look for them because they get these horrific calls. … People saying they have their missing son, daughter, mother … and that they're going to be hurt, or killed, and demanding money with no proof. And these families don't know what to believe. We're actively trying to make sure that no personal information is given out when searching. We want everything to go through us.”

“President Trump has just signed a bill authorizing $273 million for the MMIW,” Billy said. “Our chapters are not funded. We are self-providing and have fundraising events to provide resources to the families we serve. We forge alliances with affiliated groups within Indian Territory.”

“We are a grassroots organization started by families and friends, but also [by] professionals from a variety of fields. We are a group of volunteers doing our part to bring our missing and murdered relatives home,” Billy said.

More information can be found at the Coalition to Stop Violence Against Native Women website, http://www.csvanw.org, and by searching the various groups on Facebook.