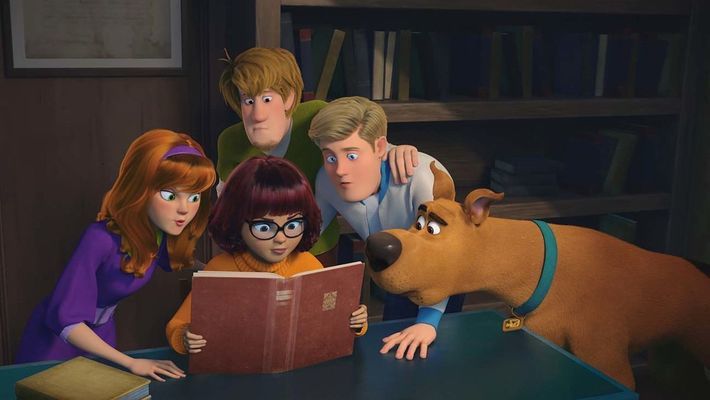 SCOOB, WB's animated reboot of the classic Hanna-Barbara series “Scooby-Doo! Where Are You?” hit Amazon, Apple, and more video-on-demand (VOD) services last week and it was hilarious, adorable, and an inevitable childhood classic.

The film opens with a plucky puppy stealing some meat from a Greek restaurant on Venice Beach in sunny California before he gets pursued by a bike cop, chasing him into the arms of a lonely, friendless, boy named Shaggy Rogers. Thinking quickly, Shaggy finds a name for the precarious pooch- Scooby-Dooby Doo. The two soon meet Daphne, Velma, and Fred and their adventures begin.

Flash forward about twenty years and Scooby and Shaggy find themselves on the out with Mystery Inc after a disagreement on the team's “image”. Their sulking takes them to the bowling alley...and makes them the target of Dick Dastardly, starting a grand adventure featuring Mystery Inc, The Blue Falcon, and so much more.

SCOOB features the vocal talents of Frank Welker (the original voice for Fred in the 1970s) as Scooby-Doo, Will Forte (MacGruber) as Shaggy, Amanda Seyfried (Mean Girls) as Daphne Blake, Zac Efron (Baywatch) as Fred Jones, and Gina Rodriguez (Jane the Virgin) as a surprisingly Latina Velma Dinkley while also starring Mark Wahlberg as the Blue Falcon and Jason Isaacs (The Patriot) as Dick Dastardly.

With a cast like that, what more could you want?

While SCOOB may not have captured the bizarre and hilarious humor of James Gunn's early-2000's films, it serves to remind us how timeless Scooby-Doo is. The film is adorable, and the fresh-faced character designs (and cast) make it known that the target audience of 10 year-olds and tweens will be growing up with the same cartoon that their parents and grandparents did.

The humor is sometimes racy but never vulgar, and ensures that parents will be laughing along with their kids. For example, while Blue Falcon dabs in style, we also get the hilarity that he mentions his biography is titled “Just Falcon Around”.

SCOOB ultimately brings together characters that might not nearly be as popular as Scooby-Doo, but have been thrust into the spotlight for what seems to be WB's attempt at a Hanna-Barbara “cinematic universe” with villains like Dick Dastardly and his sidekick Muttley, heroes like the Blue Falcon and Dinomutt, and even side-characters such as Captain Caveman plus a slew of easter-eggs hinting at other icons like Hong Kong Phooey, The Banana Splits, and The Flinstones.

Available to purchase, SCOOB isn't the best animated movie ever and it won't change the game like WB's THE LEGO MOVIE or anything, but it's a fun and carefree adventure that you'll love no matter your age. As a devout fan of Scooby-Doo, I was in love with it completely.