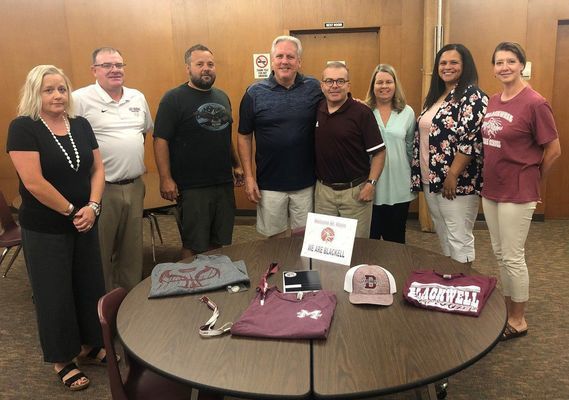 Gerry Magin got tired of driving long distances to work every day. But he’s still driven to teach.

Magin, a high school principal from Fort Worth, Texas, is the new principal at Blackwell High School. He took the job in June after the former principal, Shawn Haskins, was promoted to the position of district superintendent.

At first, Magin and his wife were skeptical about moving to northern Oklahoma. Fort Worth is a city of nearly 1 million people. Blackwell? Not so much.

But now, they’re happy to be here. The commute to work is shorter. Much shorter.

“My wife and I basically got tired of fighting traffic,” he joked. “She grew up in Odessa and went to Permian High School, so she’s always kind of wanted to be in a more rural town and smaller area.”

As an educator in the Fort Worth Independent School District, Magin served as an athletic director, football coach, head wrestling coach, assistant principal, and principal.

Magin decided he wanted to become a teacher and coach when he was in the seventh grade. He said he loves his job because he’s able to influence the lives of young people in a positive way.

“I’m excited to get up every day and go to work,” he said. “I love being around students and teachers, and I like working with the families in the community. Every day is something different, and it’s a great challenge. I can’t think of anything more rewarding than to watch students as they grow into adults and they go off and do great things.”

When Magin arrived in Blackwell to interview for the job, Haskins greeted him and “sold him on the schools.”

Magin sees a bright future for Blackwell. Education, he said, is an important part of building up the community.

“I just think there’s a lot of potential,” he said. “I know Blackwell had more people in the town at one time or whatever, but so did a lot of small towns all across the country. Blackwell has the ability to rebound and start a whole new era. Schools are an important part of that. If you don’t have good, quality schools, then you’re missing a key thing for families to move there.”

Even though he’s ready to start his job as principal, the method by which students will learn during the next school year is still up in the air; school officials, responding to the coronavirus pandemic, are discussing whether to bring students back to the classroom or have them learn from home.

“We’re not 100% sure on, is it going to look like a traditional year? Is it going to by a hybrid?” he said. “Some families may want for their students to do everything online for a while. First, we’ll have to determine how that’s going to go.”

Whether students are in the classroom or not, Magin said, educators need to provide students with a strong curriculum.

“You have to challenge students, and then, in terms of when you challenge them, you have to get them to that high level of expectations,” he said. “If you challenge them but you don’t do things that make it where they can achieve what you’re asking them to do, then, to me, that’s just fool’s gold.

To Magin, forming relationships is a crucial part of teaching. That’s another reason he’s excited to come to a small community: It’s easier to get to know people.

“The number of people that you get to know well in a large school is pretty much about the number of people that are totally in the high school in Blackwell,” he said. “Maybe a few more, but that’s kind of exciting to me – the opportunity to actually know everybody as opposed to a school with 1,600. Let’s say you know 400 or 450 of the kids. You know they’re your kids, but you don’t know them all by name. There’s a certain level of families that you know really well, some that you know a little bit, and some that, let’s be honest, you may never come in contact with them. … This is an opportunity to get to know everybody, so I’m definitely excited about that.”

When he’s not working, Magin and his wife enjoy riding their Honda motorcycles and going to lakes. They have four grown children, and they enjoy “hanging out together.”

As a principal, Magin said he’s willing to listen to people, and he hopes to create meaningful dialogues about education.

“I want to hear what they think,” he said. “It doesn’t matter if we don’t always agree. It’s not about always agreeing. It’s about being able to have a conversation.”