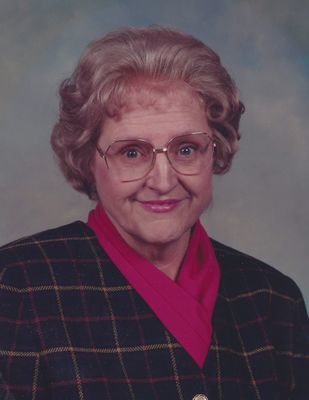 Vera Ruth Burch was born on June 1, 1936, in Wichita County Kansas, to Bert Edward and Irene (Hill) Beedy. She grew up attending Horace Grade School, in Horace, Kansas, before attending and graduating from Tribune Public Schools in Tribune, Kansas. She married Paul Franklin Burch on August 23, 1957, in Tribune, Kansas, and they settled in Coolidge, Kansas. In 1967 they moved their family to Blackwell, Oklahoma, where she furthered her education by attending Northern Oklahoma College in Tonkawa, Oklahoma, where she completed her degree and licensing as a registered nurse. She worked for the Blackwell Regional Hospital for twenty-seven years before retiring. Her husband preceded her in death on January 6, 2013, and she continued to make Blackwell her home. She was a member of the First Church of the Nazarene in Blackwell. She enjoyed volunteering at church and the hospital. She also enjoyed crocheting and solving crossword and word search puzzles.

She was also preceded in death by her parents, and a son, Rodney Earl Burch.

Services are scheduled for 2:00 p.m., Wednesday, July 8th in the Roberts and Son Funeral Home Chapel with Rev. Josie Busby of the First Church of the Nazarene officiating. Burial will follow in the Blackwell Cemetery.

Memorials have been established in her honor with the First Church of the Nazarene and the Blackwell Hospital Volunteers in c/o Roberts and Son Funeral Home, 120 W. Padon, Blackwell, Oklahoma 74631.