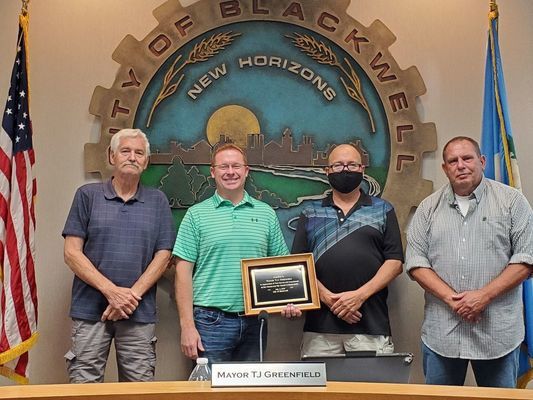 Former Mayor T.J. Greenfield hosted his last official meeting of the Blackwell City Council Thursday, where he was recognized for his years of service as mayor and as a council member.

The meeting began with City Manager Janet Smith noting Greenfield's accomplishments, including the implementation of the City of Blackwell's redesigned website, the city's event center website, and Facebook pages for both the city and the event center.

Greenfield helped to negotiate the city's water rights pertaining to the Chikaskia River, and he hosted several Town Hall meetings regarding city charter amendments. During his time as mayor, voters approved 10 out of 14 amendments. Greenfield also advocated for the passage and extension of the Blackwell Hospital Sales Tax.

“T.J. Greenfield, through his vision, helped to promote and implement major improvements to the Kay County Fairgrounds, including the replacement of the Midway street, removal of old buildings, the streetlights, the complete remodel of the livestock pavilion, and the construction of the fairground's crown jewel, the event center,” Smith said.

Smith described Greenfield's involvement in bringing new businesses to Blackwell, and she described his dedication to healthy living by helping create nature trails. She also described his dedication to Blackwell's infrastructure, including the purchase of a bucket truck, the chip-and-seal program for streets, construction of the new wastewater treatment facility, and improvements to city parks and facilities.

Smith, breaking down into tears, powered through the rest of the proclamation, recognizing Greenfield's many accomplishments “for the betterment of the City of Blackwell, urging all residents to promote the spirit of unity and cooperation rather than division and bitterness so that we're all united to build a better Blackwell for ourselves, our children, and our children's children.”

The Council approved a 0% rate increase for wastewater disposal and 0% rate increases for utility rates across the board. In a statement released by the City of Blackwell, city officials said: “The City Manager has confirmed the FY2020-2021 budget has ZERO utility rate increases, ZERO employee cuts, and ZERO cuts to the operating budget for City & [Blackwell Municipal Authority]. The budget is projecting revenues and expenses of $5.1M and anticipates a starting and ending balance of $1.7M after all expenses are paid for the year.”

The release noted that “several factors contributed to these astounding achievements.” Jimmy Davis of Davis Sanitation agreed to hold steady at last year’s rates, and Chief Financial Officer Frank Crawford worked to “clean up Blackwell’s books and show accuracy to all fund balances.” Crawford also put together a statement of cash balances showing the city has more than $12 million in its combined accounts.