Missing Cringe: I'd take furries over "YOLO Swipe up" 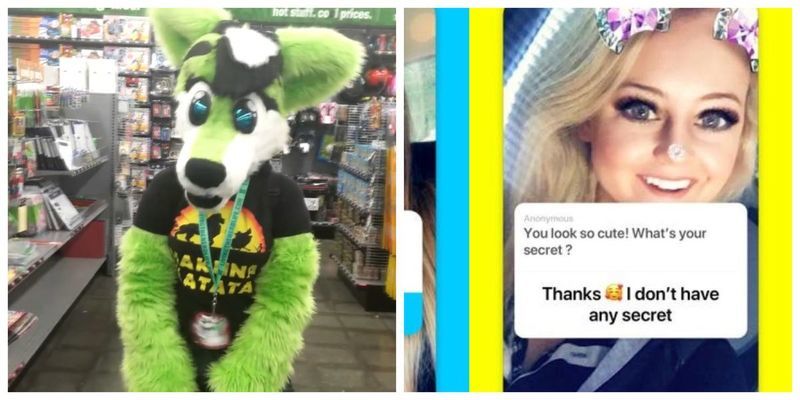 Cringe now is different than it used to be.

I've seen some stuff in my day. I've seen men brandish shutter shades and neon green/pink flat-bills with sayings like “Party with Sluts”, and i've seen those same infantile neanderthals develop into cocky wanna-be influencers who post pictures of themselves on Snapchat begging people to “YOLO swipe up TBH”

The “swipe up thing” would probably be fine for middle school kids wanting to send messages to their crushes, but isn't fine for a 27 year old man (or woman) to do begging for attention (which they are). It's horrific. It's cringe-inducing.

I've also seen people from my hometown post pictures on Instagram that get THOUSANDS of Likes- only to find out they pay for a bot service, which is where thousands of dummy accounts are created to boost your “clout” and make you look famous. Also cringe-inducing and pathetic.

Many of you may know me as “the guy from the Community Talk Page” where I fought the good fight during the summer of 2019, only to finally be banned, blocked, and “defeated” by the egomaniacal low-IQ denizens that control it. The community talk page, also, is cringe-inducing.

I miss the simple cringe. I miss not surfing through Snapchat, Instagram, or Facebook (after I infiltrated Community Talk again, haha) and being utterly disgusted by the world.

Many who know me (personally or from afar) know that I long for what is called the “aughties” or the period between 2000-2010. A period of great advancement...a period of unbridled joy and passion.

A period where the “badguys” were Scientologists and Furries, not liberals or democrats. Not feminists or nazis. A time when a video like “Foam Adventure” (look it up if you wish, you'll know the one) would be the most revolting thing you could see in a year, instead of people on TikTok crying about Harry Potter analogies like “Donald Trump is Voldemort”.

Back in the day, things like “Rawr means I love you in dinosaur” were what made me cringe. It made the collective consciousness of humanity cringe. Those little cartoons like “I made you a cookie but I eated it”, things with Girr from Invader Zim...that was cringe. But looking back on it now, it's...wholesome (the good kind). It was innocent.

I'd take a million of those images back instead of some Facebook arm-chair politician arguing with himself in his own comments section or sharing 30 images about how “wise” and “wholesome” (the bad kind) Avatar The Last Airbender on Netflix is or how “epic” some other dumb nerd crap is.

With little “new” content released the past few months, I've had a lot of time for inward exploration. I've just spent eight or so paragraphs rambling about it. I've spent years writing a novel about the early days of the internet and the culture around it, and in doing so I've gone to some dark, dusty corners of a life long forgotten.

A world where guys wanted emo girls, emo girls wanted emo guys...not a world where everyone did the “ahego face” and streamed on Twitch. A world where people were bullied and made fun of for watching anime, not encouraged for it. I long for us to reject modernity. To embrace tradition.