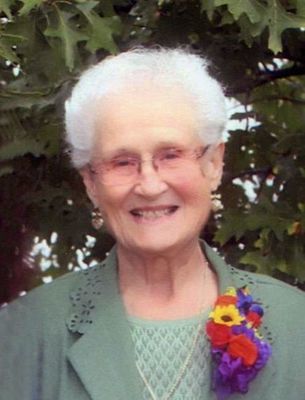 JoeAnn Guyer, longtime resident of the Ponca City area, flew away on the wings of a snow white dove to be with her Lord and Savior on July 24, 2020, at the age of 93 years.

JoeAnn Guyer was born on February 27, 1927, in Blackwell to Arthur and Juanita (Jones) Croft. In the years to follow, JoeAnn had a loving step-father, Orville Stokesberry. As a young girl she lived in Western Kansas before moving to the Ponca City area. JoeAnn graduated from Ponca City High School in 1944. Following her education, she worked at S. H. Kress as an assistant cashier for two years before marrying Gene S. Guyer on March 2, 1947. The couple had met as teenagers at the Prairie Chapel United Methodist Church. Following their marriage, they established their farm home near the church and resided there for sixty-two years of marriage. JoeAnn began her farm life working with the Guyer Dairy. She continued to assist Gene with their own farming and livestock operation and raising their three daughters, Connie Sue, Gayle Ann and Camille Kay.

JoeAnn was a member of the Prairie Chapel United Methodist Church where she served as treasurer for the Women’ Society of Christian Service (WSCS), and taught Bible School and Sunday School for both children and adults. She was always active with her children’s activities in the Prairie Chapel School. As a devoted mother, JoeAnn was instrumental in assuring her girls were well educated and had opportunity to develop a musical talent.

JoeAnn’s special talents include sewing, quilting and cooking. The three Guyer girls always had beautiful seasonal and holiday clothing sewn with meticulous care. Their wedding dresses were designed and lovingly made by their mom. JoeAnn pieced and created numerous quilts from all her material scraps for all her family. She was an exceptional cook and prepared nutritional meals daily, but the holiday meals were truly a feast that gathered the family home. Her meals on wheels to the harvest field would promptly roll in at noon and again at 6:00 p.m. You could actually set your watch by her arrival time.

JoeAnn greatest joy was spoiling her grandchildren and great grandchildren. Cookies were always in the freezer if not freshly baked, and pop was in the garage refrigerator.

She was preceded in death by her husband, Gene on October 4, 2009; her mother, father and step-father; two sisters, Bessie June Muret and Ruby Lee Desmond; and infant brother; and four nephews and one niece.

When JoeAnn could longer reside on the farm, she entered the Ponca City Nursing and Rehabilitation Center. The family appreciates the loving staff who have provided her needed care the past six years.

Being respectful of the COVID-19 pandemic, JoeAnn’s family will celebrate her life with a private family only memorial service.

On-line condolences and memories can be shared at www.robertsandsonfh.com

Braman voters will turn out next week for a pos...