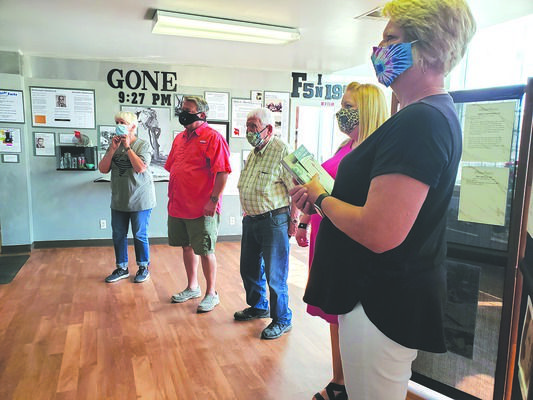 The Top of Oklahoma Historical Society Museum on Saturday unveiled to a small group of Blackwell leaders, benefactors, and historians a new interactive exhibit room dedicated to the devastating EF-5 tornado of 1955.

The group was invited to view the display ahead of its public opening Aug. 3.

The room is a project that has been in development since 2014 to commemorate the 65th anniversary of the May 25, 1955 tornado that devastated Blackwell and Udall, Kansas during the Great Plains Tornado Outbreak.

The commemoration began Saturday morning in the museum's club room with an introduction from Top of Oklahoma Museum Director Dianne Braden.

“We couldn't have done this exhibit without all of our help from the City of Blackwell and everyone involved,” said Braden, who then asked museum board members to stand in recognition of their work.

“We'd also like to thank our museum director, Melissa Hudson, and her family, who are up here sometimes until nine at night and six in the morning,” Braden said. “Whatever we could pay her isn't enough.”

“I'm not from Blackwell, so I've learned a lot in the past few weeks about the tornado,” Cox said. “I believe the museum has worked hard and tirelessly on this exhibit. The films they show are great. And I've never been a museum guy, but I'm happy to be here for this. Take your time in the exhibit and soak it all in.”

After Cox spoke, Udall City Councilman Carl Smail spoke. Smail was a representative for Udall Mayor Steve Brown, who was in quarantine.

“Welcome from Udall,” Smail began. “It's been amazing to see this come to life. It's really amazing being able to see the things that happened during that night with Blackwell and Udall.”

The next speaker was Ron Beard, president of the Udall Historical Society. He thanked museum board members before donating to the museum a shirt with a photograph of the devastation in Udall. Beard noted that Blackwell and Udall are forever tied together.

“When someone talks about Udall, Blackwell always is named first,” he said.

Author Ginny Johnston Goresen, who wrote the 65th anniversary book about the tornado titled “Without Warning,” also spoke. Her book is available for purchase at the museum.

Oklahoma historian Bob Burke, with whom Goresen co-wrote the historical book, was in quarantine, so he couldn't join her at the ceremony. Goresen said how amazed she was with famed Oklahoma meteorologist Gary England writing the foreword for the book. She mentioned that England showed interest in speaking at the museum once the coronavirus cleared up.

Forrest Mitchell, operations program leader from the National Weather Service, discussed how iconic the tornado was. He noted that modern research has gauged the winds that night to be upwards of 300 mph.

A day that will live on in history, May 25 began with a man being killed by a bolt of lighting and culminated with 23 people being killed, 79 people being hospitalized, 294 homes being destroyed, 299 farm buildings being devastated, and over 28,000 meals being served to volunteers who helped put Blackwell back together.

The exhibit, which can be self-toured to promote social distancing, begins in the museum's front room. It offers a “flashback” to the mid-1950s, explaining what was popular at the time: movies, TV shows, celebrities, music, and candy that can be purchased to benefit the museum. It also discusses important events such as the Civil Rights Movement.

Guests will then enter the exhibit room, where they can view the tragic story of Udall, KS, which was completely destroyed by the tornado. Guests can see headlines from local and national newspapers as well as photographs of the damage. They can also hear eye-witness accounts and view a special documentary short-film with testimonies from real survivors and workers.