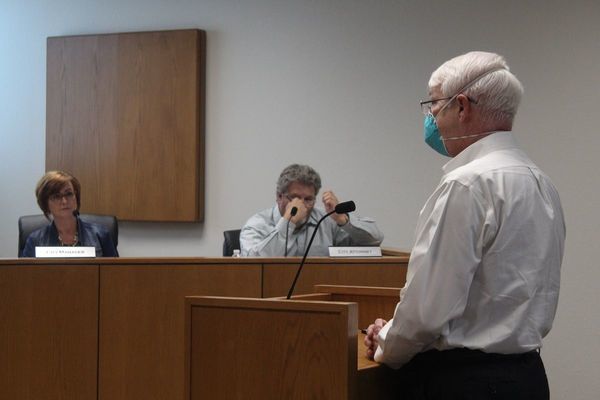 The Blackwell City Council met Thursday night to discuss several key matters, including the fate of the Kay County Free Fair to be held the second week in September deciding ultimately the fair will be held but reduced to only livestock and 12 food vendors.

"It's not going to be like usual," Kahle said, "but we want to give the people something. Of those we polled to ask about the fair, 80% have said yes."

Blackwell City Council, led by Vice Mayor Steve Marquardt in place of Glenn Cox, then heard from Stillwater Medical Center's Dr. Jeffrey Shuart who pleaded with the Council not to hold the traditional carnival aspect.

"This is a massive pandemic," Shuart said, "I'd recommend waiting until November, December...maybe Spring...maybe just wait until next year. I'm less worried about the kids showing livestock than about those kids going home to show grandma their ribbon from showing...and grandma getting [infected]."

"The only thing I can do is to try and protect my community," Shuart said.

Dr. Shuart heard from City Councilmen including Tom Beliel and Jon Webb. Webb noted that there was still much confusion around COVID-19 and that he had heard the Centers for Disease Control and Prevention (CDC) recommended against masks. Webb said that while he wasn't going to say it wasn't "serious", he ultimately said it wasn't his place to tell people to come to the fair or not.

Emergency Manager and Fire Chief Cory Hanebrink also addressed the Council. Hanebrink was also present at the Fair Board meeting in late-July where he cautioned the Board on holding the traditional fair. As at that meeting, Hanebrink noted, gravely, that this would be "[Blackwell's] biggest fair yet."

Hanebrink presented a list of local festivals and events that had been cancelled or postponed due to the coronavirus, warning that the 2020 Fair would, if held, attract "everyone" from Oklahoma and Kansas, and especially mentioned that condensing the crowd into three days would also be detrimental. With no clear "entrance" to the Fairgrounds, Hanebrink told the Fair Board and the City Council that it would be nearly impossible to try and read temperatures or control the entries and exits of the crowd.

"I spoke to some coaches today...I have to confirm but I've been told they told me that sports games will be played with no crowds. These seniors will have to play football and their parents can't even be there to cheer them on in-person. If this fair was held and we had another outbreak...that would ruin their season completely," said Hanebrink.

Councilman Webb said it was the attendees choice to go or not. Chief of Police Dewayne Wood disagreed, noting that some City employees had no choice and telling them to please remember their staff when making the decision to hold the Fair. The Blackwell Police Department are used as security for the Kay County Free Fair, and Wood was concerned for their safety against the virus as well.

Ultimately City Manager Janet Smith spoke to Fair Board President Jake Kahle about various revisions to the Fair Board's annual lease agreement with the City of Blackwell for the fairground with input from City Attorney Bryce Kennedy, noting that the City of Blackwell would not allow the Fair Board to lease the Event Center, 4-H Building, or the Event Center and 4-H's respective "green zone" of the grounds which are almost exclusively used for the carnival rides, games, and ticket booth, which would leave the Fair Board working with the Livestock Pavilion, Whitman Arena, Horse Arena, and the Midway.

Kahle said that the Board had encouraged the 12 vendors to promote "to-go" orders, eliminating benches, chairs, and areas where attendees could congregate.

Kahle will take the Council's ruling back to the Fair Board to be voted on.