Throwback Review: SCARY STORIES TO TELL IN THE DARK 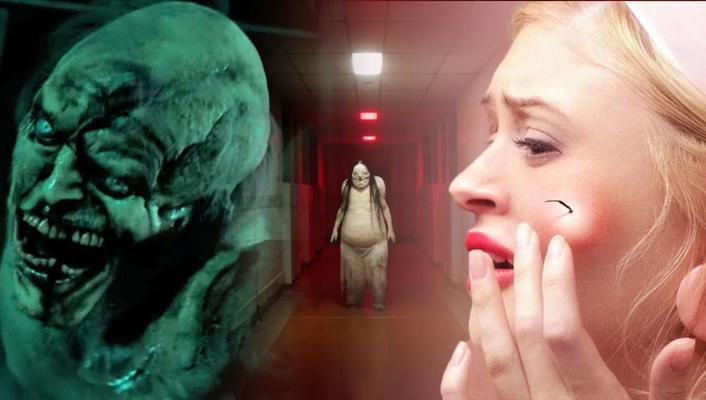 Those lines, oft repeated by Zoe Colletti’s Stella, set the tone for a film as interested in the terrifying political climate of the Vietnam-era world as it is with the nature- and power- of fiction. Mainly the way it is leveled at women.

One year ago this week saw the release of André Øvredal’s SCARY STORIES TO TELL IN THE DARK, an adaptation of the famous short-story collections by Alvin Schwartz that haunted the nightmares and dreamscapes of every youth with access to a middle school library since the 1990s, iconic for their disturbing illustrations that accompanied each story by Stephen Gramell.

SCARY STORIES, written by brothers Dan and Kevin Hageman (Hotel Transylvania, The LEGO Movie), is set in the Autumn of 1968 in the sleepy Pennsylvanian town off Mill Valley and follows plucky teenage outcast Stella (Zoe Margaret Colletti) with her two friends Auggie (Gabriel Rush) and Chuck (Austin Zajur) who cross paths with drifter Ramon Morales (Michael Garza) and find themselves in the abandoned haunted mansion of Sarah Bellows on Halloween night.

In the basement, where the tortured Sarah was locked away by her socialite family, they find her mysterious book filled with eerie tales. Upon calling her name, the blank pages soon begin willing up- written in blood- foretelling the horrific fate of all those involved. Now in a race against time, the teens have to unravel the mystery of Sarah Bellows while finding themselves as the main players in a series of ghoulish tales, fighting for their lives.

SCARY STORIES might be a PG-13 horror film aimed at a teenage audience, but the film is anything but a kiddy affair. The scares are very real, and shockingly effective as they hardly rely on “Boo!” jump-scares in favor of methodically paced and hair-raising atmosphere- aided by the (more often than not) impeccable work bringing the book’s illustrations to life.

Director André Øvredal played in a similar toybox of urban horror and superstition with his knockout debut film THE AUTOPSY OF JANE DOE, and uses his understanding of picturesque New England towns and folklore from that to carry over seamlessly while nestling into the “outcast kids on bikes” staple of recent hits like STRANGER THINGS and IT.

SCARY STORIES is very interested in scares, but it is also interested in how fiction is leveled towards women. The main “antagonist”, the ghostly presence of Sarah Bellows, was treated as a witch by her family and as one critic wrote so elegantly: “What is a witch, after all, but a woman who doesn’t conform?”.

Sarah’s ghost lives on through rage and pain, and she uses her stories for evil, as payback. Stella, our 17-year-old main character, is still scarred by her own mother walking out on her from a young age, but rather than letting it shape her negatively, she uses fiction to heal. She surrounds and drowns herself in movies and stories, and is an aspiring writer with dreams of weaving her own narrative. It is this captivating duality that makes the heart of the film beat so well, despite the pumping bloods and dark veins running through it.

There is, of course, some well-woven political power at play here.

The news coverage of Nixon and the war in Vietnam is always on the radio or television, paralleling the ghostly terror plaguing Sarah and her friends with the actual terror of a nation ripping itself a part and going to war. If last year’s ONCE UPON A TIME IN HOLLYWOOD was Quentin Tarantino’s fairy tale of a world where the peace and decadence of the 1960’s never ended, SCARY STORIES is the nightmarish reality of what followed.

The film is produced by iconic director and monster-lover Guillermo del Toro who has used his love of film, fantasy, and the macabre to craft Gothic and haunting stories that are as much about love as they are about terror with films like PAN’S LABYRYNTH, HELLBOY (2004), and CRIMSON PEAK, and SCARY STORIES fits nicely on that shelf. If you’re a horror buff or a genre fanatic, this film continues the shockingly great year of horror-fiction following knock-outs like ANNABELLE COMES HOME, LA LLORONA, and will be a nice appetizer for next month’s IT: CHAPTER TWO.

As the film ends, setting up a promising sequel, Lana Del Rey’s haunting cover of 1966’s psychedelic Donovan song “Season of the Witch” plays over the credits. A song written at the height of hippie culture that signals the coming times of turmoil and darkness, Del Rey matches that atmosphere with a macabre and, somewhat sweet, hymnal that absolutely nails the film’s tone and message: “Stories hurt, stories heal.” Art hurts. Art heals.

Letter to the Editor: Blackwell is fortunate fo...