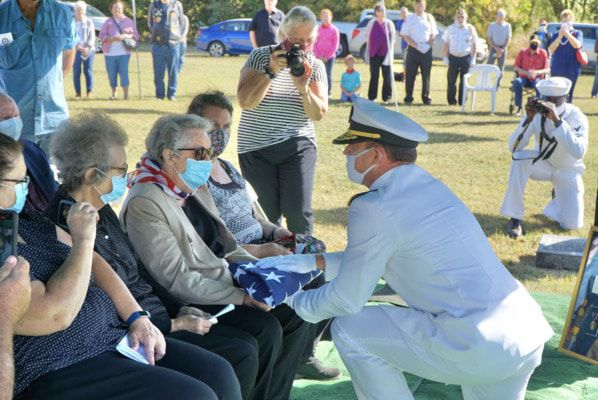 BRAMAN – On what would have been his 100th birthday, an Oklahoma-born World War II veteran killed at Pearl Harbor was laid to rest Wednesday near his former home.

Rex E. Wise was buried beside his parents and siblings at the Braman Cemetery during a military funeral at 10:30 a.m. Officials from the Wichita Navy Reserve gave Wise a three-volley rifle salute and presented the American flag used to cover his coffin to one of his family members.

Wise, who was 21 years old at the time, was one of hundreds of sailors at the base whose bodies couldn’t be immediately identified.

Personnel with the Defense POW/MIA Accounting Agency identified Wise’s remains on Oct. 17, 2019 after examining his dental records and obtaining saliva from his sister, Eunice Wittum.

His remains were delivered to his family and funeral home workers at the Dwight D. Eisenhower National Airport in Wichita, Kansas, during a ceremony Tuesday, the 245th birthday of the U.S. Navy.

Dozens of family members, military veterans, firefighters and police officers attended the funeral Wednesday to pay their respects to Wise.

Dressed in his bright white uniform, U.S. Navy Chaplain Daniel McGraw read Wise’s eulogy as the sun shone down on the flag-draped coffin behind him.

“It’s fitting that we’re here today because today would have been Fireman Wise’s 100th birthday, and yesterday was the 245th birthday of the United States Navy,” McGraw said. “It is our admiration and love for Fireman Wise – and our connection to the Navy that he honorably served – that unites us all here today.”

American flags planted in the cemetery by the Braman American Legion Auxiliary Unit No. 259 waved in the wind as recordings of “God Bless America” and other patriotic songs played through a speaker system.

Fittingly, the wind died down when the softest line in “The Battle Hymn of the Republic” played.

“Fireman Wise gave his all, even to the last full measure, for the love and protection of his country,” McGraw said after the song ended. “He stepped up to serve during tumultuous times, and he faithfully kept the watch. His life exemplifies the honor, courage and commitment that we hold so dear. And now, he has finally come home to rest.”

Sailors then performed the traditional rifle salute. Following the salute, one played “Taps.”

No one spoke as the bugle player held out the last note of the song, a somber ‘C.’

Sailors removed the flag from Wise’s coffin and tightly folded it into a triangle, a tradition at military funerals. A sailor then presented the flag to Weller, 87, one of the few surviving family members who had the chance to meet Wise.

She laid her hand across the flag in her lap, her eyes drawn to the casket in front of her.

Rear Admiral Robert Nowakowski, the acting deputy commander for the Navy Recruiting Command, delivered a message to the family.

“It’s great to be able to remember such a hero that we unfortunately lost over 78 years ago in battle at Pearl Harbor,” he said. “But what I want to do is give you some optimism as well. Last year, the Navy actually recruited about 40,000 new sailors to come in to be a part of the world’s greatest Navy, and I just want to assure you that the legacy of Petty Officer Wise is going to be taken on by thousands of additional sailors that are joining our strong force.”

As the ceremony ended, Weller stepped out from the green canopy at the burial site.

In her words: “I’m thankful that he’s home.”