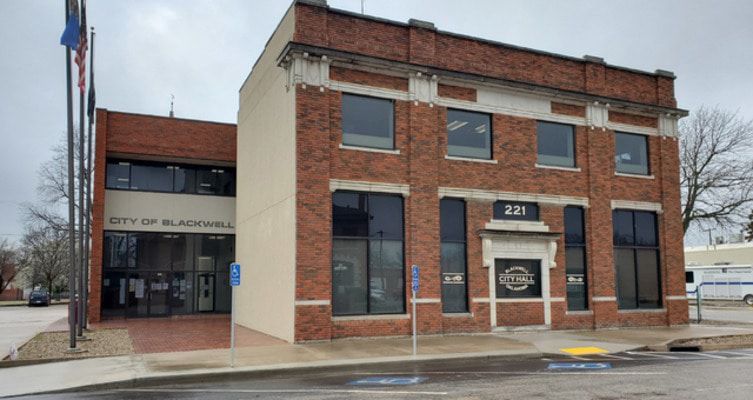 The Blackwell City Council met for a regular meeting Thursday night. The Council heard the city's financial report from the city's chief financial officer, Frank Crawford, and approved the purchase of a compact tracked loader for the city's Streets and Parks Department.

The meeting began with reports from various city officials.

Top of Oklahoma Museum Director Melissa Hudson spoke first. She said she is decorating the museum for Thanksgiving and Christmas. The next speaker was Megan Childers with the Blackwell Tourism and Development Board. Childers discussed the recent facelift to the 4-H and Future Farmers of America building at the county fairgrounds.

John Robertson, executive director of the Blackwell Industrial Authority and the Blackwell Area Chamber of Commerce, then spoke. He said expansion talks with CFM Corporation stalled during the pandemic's early days, but added that they should pick up in the next year. Duke Energy, a renewable energy company, will be building new wind turbines between Blackwell and Kansas soon, Robertson said.

Crawford then spoke, thanking the Council and city administration for the support and thoughts directed towards his wife, who overcame a harsh battle with COVID-19 that kept Crawford from attending the last few meetings.  Crawford said the city's sales tax revenue is going up, among other items.  Blackwell Emergency Manager and Fire Chief Cory Hanebrink discussed the coronavirus. Hanebrink chronicled the pandemic from March, when the outbreak happened, up to November.

He gave an update on the number of cases in Kay County, with 13,044 cases and more than 20 deaths. Blackwell has had over 160 cases, with two deaths and 118 recoveries.  Hanebrink stayed at the podium to speak about Ordinance 20-21, which is the city's ambulance subscription service. Under this service, residents of the emergency medical services district can pay a $5 per-month fee. If the Blackwell Fire Department responds to a person's home, the fire department will bill the person's insurance provider. The resident will not be charged for the full cost of his or her emergency medical transportation.

The Council approved the service. Councilman Jon Webb said he wondered why the city was adding “another fee” for its citizens to pay. Councilman Richard Braden explained that the service is optional.

City Manager Janet Smith said Webb wasn't connecting the dots with insurance. She explained that the service was a way to offset any insurance costs for EMS transportation in exchange for a flat fee of $60 per year, allowing the City of Blackwell to write-off any expenses to the patient.  “This is a good thing for our residents,” Smith said.

Hanebrink agreed, saying patients often refuse transportation because they can't cover the transportation costs. He said this breaks his heart, so this service is a way to ease that.  The Council then approved the purchase of digital radios for city workers. These radios would work across all departments.

Currently, city workers in each department have radios. However, these radios only work within their respective departments.

Chief of Police Dewayne Wood said the new radios would save workers from having to use cell phone connections to call other departments. He said this was a hassle during the October ice storm, when the Blackwell Public Power Department had to use inconsistent cell phone connections to personally call other departments to coordinate operations. He said this was complicating and wasted the limited amounts of time workers had. The Council heard from Streets and Parks Department Superintendent Chuck Anderson, who said his department needed a compact tracked loader.

Anderson used the ice storm as the basis for the request. He said a loader would have made the moving of large limbs and debris easier when workers were clearing alleyways for the electric department to access damaged electrical infrastructure. The item was approved.