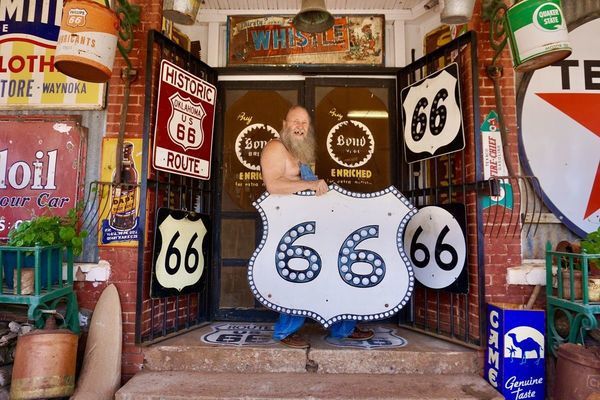 “Route 66 will be more visible to not just tourists, but also your average traveler or just average Oklahoman, which I think will also be very effective of just making more people aware of how valuable the road is,” said Oklahoma Lt. Gov. Matt Pinnell, who also serves as the state’s secretary of tourism.

The Oklahoma Department of Transportation will replace about 80 existing signs along the highway and add about 320 signs in other places, transportation spokeswoman Terri Angier said. The project is expected to begin in the spring and will cost approximately $20,000.

Oklahoma has roughly 400 drivable miles of Route 66, and state tourism officials say they believe that additional road signs will encourage travelers to support small businesses along the route.

“Ever since I became involved in Route 66 years ago, the No. 1 thing we hear from travelers as something we need to improve is signage,” Martin said. “Since the centennial of Route 66 is coming up in 2026, we thought this would be a great first step to improve the travel experience on Route 66 in Oklahoma. Something that’s needed to be done for a while now has some energy behind it.”

The new signs will look slightly different from the current ones, but the design won’t change much, Martin said.

“Our existing signs have the Route 66 shield in the middle, and it says ‘Historic Route’ on the top and bottom with some white banding,” Martin said. “Basically, all we’re doing on the new signs is removing the white banding on the top and the bottom. … It will help that sign ‘pop’ a little more for a better visual impact.”

Route 66 was the brainchild of Tulsa businessman Cyrus Avery, who served as the state’s highway commissioner and charted the famed road’s course through the Sooner State. Construction of the highway, which stretches from Chicago, Illinois, to Santa Monica California, began in 1926. The road was decommissioned in 1985.

Each year, thousands of tourists visit Oklahoma to travel Route 66 – and many of them stop at the Sandhills Curiosity Shop in Erick, Oklahoma, to hear some live music.

Musician Harley Russell has played the guitar since he was 12 years old. For years, he’s been performing for the Mother Road’s travelers in a brick building filled with Route 66 memorabilia that he uses as a set for his musical performances.

Russell said travelers tell him that they have gotten lost because road signs are missing or have been stolen, he said.

“That’s the only thing I’ve ever heard about Route 66 signs along the road is that ‘there isn’t enough signage, or they’re missing, they’ve been stolen, we couldn’t find the signs, and we’ve been lost about half of the time,’” he said. “That’s what I hear, and I hear it from people all over the planet.”

Russell said that “99 and 9/10ths” of his visitors, which number in the thousands, are from overseas. He said he believes the signs will help travelers find their way on the road.

While international tourism has decreased because of the coronavirus pandemic, Martin said more Oklahomans are beginning to travel the road. He said he hopes the new signage will guide drivers as they visit historic landmarks along the highway.

“This will help enhance Oklahomans’ understanding of where Route 66 is and its impact to the growth of the state and, of course, to the story of America throughout the 20th Century,” Martin said. “I’ve lived in Tulsa my whole life, and it wasn’t until I was almost 30 that I realized Route 66 was here, and there are tons of people just like me that just go about their life. Until they see a sign somewhere that says ‘Route 66,’ they don’t even know it’s here.”

Angier said the signs will be placed along the highway and near the junctions of other highways, including Interstate 40, which closely follows Route 66.

Hopefully, officials say, the new signs will inspire travelers to pull off of the interstate and get their kicks on Route 66.

“If you are on I-40 and you are getting ready to cross Route 66, you’ll see a sign that tells you so you have the option of getting off and driving 66 for a little bit,” Angier said. “It’s one thing for people who already know where this route is and they’re driving it, but your new tourists – or new interest – is going to come from people on the interstate or a major highway that have no clue that they’re getting ready to come up on 66. We think these junction signs really will help to grow that crowd who want to see 66.”