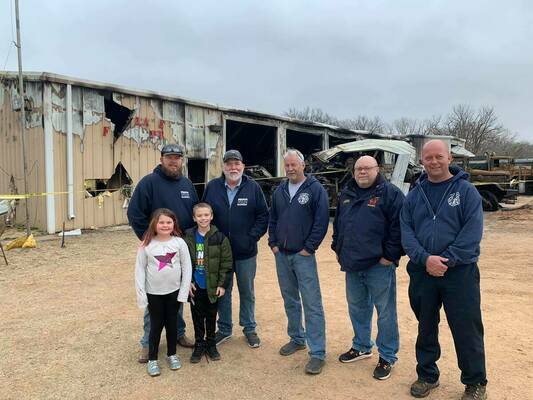 When a fellow rural fire department needed help, Braman firefighters swooped in to save the day.

The Twin Lakes Fire Department, a volunteer department near Crescent in Logan County, lost all of its equipment in fire on Feb. 21. The department’s building – housing all of the organization’s fire engines and safety gear – burned to the ground.

“I couldn’t imagine what they’re going through,” said Braman fire chief Kris Spencer. “They lost everything.”

In the days and weeks since the blaze, fire departments large and small from across the Sooner State have donated equipment to Twin Lakes firefighters – including Kay County’s own Braman Fire Department, another volunteer agency.

Spencer said Braman firefighters donated helmets, boots, gloves and other gear to the Twin Lakes department. The supplies are worth up to $5,000.

“I just contacted them to see what they needed, and that was what they needed,” Spencer said. “We had some spare stuff lying around, so we all got together on the fire department and made the decision to donate it to them.”

“Everybody in the state has helped support them and try to get them through trying times,” Spencer said. “If that happened to us, we wouldn’t have anything either. Hopefully, the brotherhood would step in and help us.”

Spencer said he’s humbled by the generosity of his firefighters.

“I’m proud of them for all their hard work and dedication to the community and surrounding communities,” he said. “If it wasn’t for them, we wouldn’t be able to do what we do.”