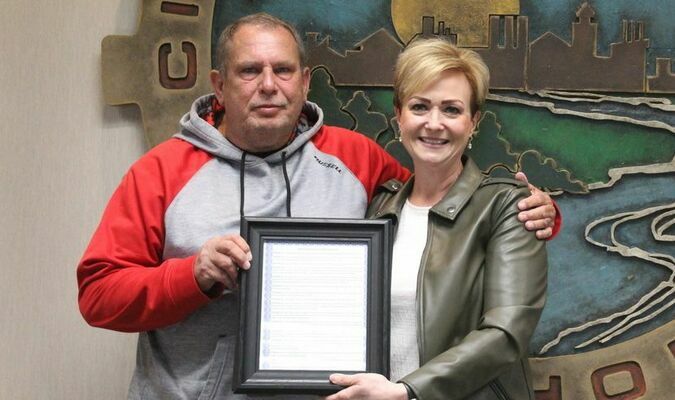 The Blackwell City Council met Thursday night to say goodbye to councilman Tom Beliel. Council members also discussed the contract of City Manager Janet Smith as well as the construction of a planned public safety training facility at the intersection of Ferguson Avenue and 13th Street. Council members started a workshop at 5 p.m. and didn’t adjourn the regularly scheduled meeting until close to 9:30 p.m.

During the Council meeting, they recognized Ward 3 Councilman Beliel, whose term on the Council has come to an end. Smith read a proclamation honoring the former fire chief, which Beliel accepted along with thanks from current Fire Chief Cory Hanebrink as well as other Blackwell fire fighters.

Beliel will be replaced on the Council by Robert Husted, who was elected earlier this year. The Council’s first order of business was an update on the Larkin Hotel, which has stood abandoned for years after being recognized on the National Register of Historic Places. While the Larking was initially set to be condemned because of the fact it is a dangerous, derelict structure, City Prosecutor Mike Vanderburg said he had spoken with Code Enforcement Officer Jerry Wieland about it.

The company that purchased the site has now restructured and is back on its feet, he said. Company officials are eager to get back to work on their project to turn the Larkin into housing. The Council tabled the matter until next month. The Council was then asked to consider the appointment of Mike Loftis to the Blackwell Hospital Trust Authority, as per the organization’s request. Mayor Steve Marquardt suggested appointing City Manager Janet Smith to the trust instead and suggested performing an audit of the trust.

City Attorney Bryce Kennedy directed that Marquardt could only motion in respect to the agenda items. Beliel, Marquardt and Councilwoman Julie Green abstained from voting, causing the motion of Loftis’ appointment to fail.

The Council then approved a funding agreement with the Blackwell Tourism group, ending months of debate and stalemates. Big-budget items such as a waterline project from the Cowan Group and street engineering proposals from Guernsey Engineering were discussed but tabled until after the April 6 election.

Board of Education accepts 9 resignations; hires 9