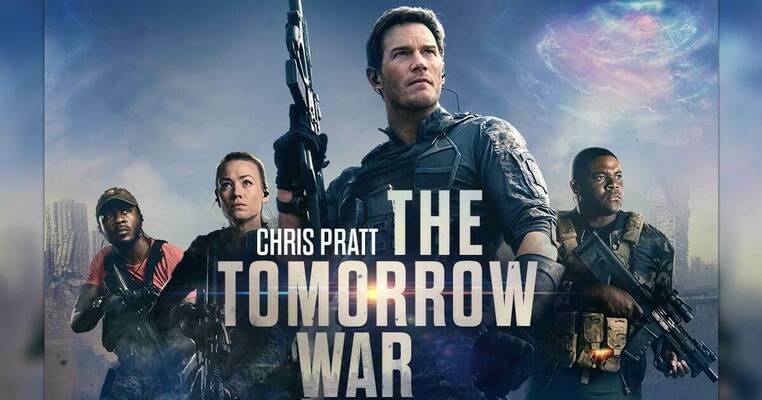 “You know what It takes to be the best? You’ve got to say to yourself ‘I will do what nobody else is willing to do’.”

Chris McKay’s THE TOMORROW WAR premiered on Amazon Prime over the 4th of July weekend and is a thrilling, unexpected, and somewhat heartfelt sci-fi action film for an age longing for the next “Independence Day” spectacle.

The world is stunned when a group of time-traveling soldiers from the year 2051 interrupt the World Cup on national TV to deliver a chilling message: 30 years in the future, humanity will lose a war to a deadly alien menace known as the Whitespikes. Plunging societies across the globe in chaos, the first world-wide draft is initiated to send humans into the future to fight a seemingly doomed “Tomorrow War”.

Among the draftees is Iraq War veteran turned family man and high school teacher Dan Forester (Chris Pratt) who is sent hurtling through space and time into a devastated Miami, Florida where he comes face-to-face with the alien menace and realizes that the future...and the past...are in his hands.

THE TOMORROW WAR is a strange film, in the sense that it doesn’t really serve any purpose but to entertain. I say that, because it’s a rarity in today’s blockbuster-franchise-driven age where every film is created with the intent of kicking off it’s own supplemental TV series, character-driven spin-offs, and sequels that this film just...exists. It tells a story from start to finish, and ends.

Screenwriter Zach Dean who has two other credits to his name, seemed to throw everything and the kitchen sink into his plot which begins in a California suburb during Christmas, leaps 30 years into a devastated Miami, takes us to a “G.I. Joe” playset in the form of an oil rig base camp outside of the Dominican Republic, and finally finds us catapulting through the snowy Russian tundra. Not that it’s a bad thing, but the film does begin to feel a bit long at 2 and a half hours.

Chris McKay directed THE LEGO BATMAN MOVIE and worked as an editor on THE LEGO MOVIE. His experience with colorful, funny, toys translates shockingly well during the best parts of THE TOMORROW WAR which deal with Dan Forester and his team in the middle of a terrifyingly bleak Miami building complex where they’re hunted by the film’s aliens and make a daring Michael Bay-esque escape through an airstrike on the interstate.

Made by Paramount and sold to Amazon during the COVID-19 pandemic, the film is very much a star vehicle for Chris Pratt, who already headlines the “Jurassic World” and “Guardians of the Galaxy” franchises. Here, he emulates more of the straight-faced commando from the former and less of the goofball from the latter, save for a few scenes here and there. Pratt is a fantastic actor, but the movie could have benefited more from his scene-stealing charisma.

However, his real-world love of firearms does sell the immersion of the film. There’s something so specifically satisfying about watching his character switch from his rifle to his sidearm with the kind of fluidity you expect from “John Wick”.

Pratt is joined here by a predictably stoic J.K. Simmons (The Accountant) and a hilariously nervous Sam Richardson (HBO’s VEEP) but it is Pratt’s future-daughter played by Yvonne Strahvoski (Shameless, The Handmaid’s Tale) that gets to really showcase her entire range of talent.

While THE TOMORROW WAR has its fair share of family drama (some darker than others), it is a fairly happy film as far as the story is concerned.

One troubling factor, for me at least, was the treatment of the Whitespike Queen.

Our heroes capture the queen, unkillable by all their tried methods, in order to experiment on her and find the Whitespike’s true weakness. She is apprehended and chained up in a laboratory where she is heavily sedated and hung up to be prodded and tested on, crying out in whimpering clicks.

The audience, naturally, feels sympathy for the queen. Much as we are expected to by seeing similar monster matriarchs in peril, regardless of their narrative role. The Xenomorph Queen in James Cameron’s ALIENS acted as a parallel to Sigourney Weaver’s Ripley- two mothers acting out their maternal instincts to protect their young.

The Queen treats Ripley initially with respect, and soon the two have their battle. The T-Rex in the “Jurassic Park” films, of course, is another ass-kicking monster mommy.

Even the titular Mummy, Princess Ahmanet, in 2017’s THE MUMMY is a sympathetic creature when she is chained up and bound.

In THE TOMORROW WAR, the alien queen is treated as a monster. We do not feel her pain, nor do the characters. She is a weapon, and she is treated as such. It is a subversion that feels mean-spirited, and perhaps that was intentional. Either way, it is at least thought-provoking.

THE TOMORROW WAR is entertaining if a bit long, and is a great way to kill an afternoon. It is now streaming on Amazon Prime.

Looking Back- Thinking Forward: We must support...

Review: NO TIME TO DIE sends off Craig in uneve...

How do you deal with being overwhelmed? is it G...