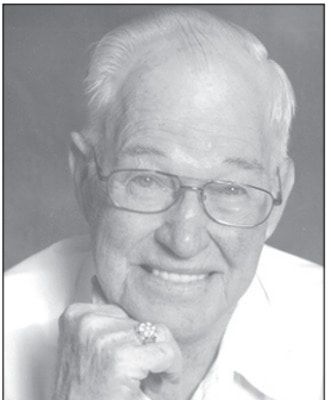 George W. Glaze of Blackwell, Oklahoma, died Monday afternoon, August 9, 2021, at his home in Blackwell at the age of 90 years. George W.Glaze was born on September 5, 19.30, in Amarillo, Texas, to Tom H. and Virginia (Johns) Glaze.

The young family then moved to Blackwell where he grew up attending Blackwell Public Schools and graduating with the class of 1949. Following high school he entered the United States Navy and began thirteen weeks of training at the San Diego Naval Training Station.

Upon comple-tion of his training he was assigned to the USS Frank Knox Destroyer through his enlistment term of March 13, 1953. Following his honorable discharge he began working as a welder for Kansas Gas Service Company in Wichita where he worked for twenty-six years. He met the love of his life, Alice Marie Stroot, and they were married at St. Joseph’s Church in Wichita on June 27, 1953. Following their marriage the couple bought some property in Clearwa-ter and built a home. The couple were avid bowlers and enjoyed playing the card game pitch. To-gether the couple had six children. Alice passed away on July 29, 2005.

George was known as the “MacGyver” of Sedgwick County; if you needed something fixed call George. His motto was “never leave home without a screwdriver, pair of pliers, xacto blade, battery cables and a roll of duct tape.” George later married Wilma Jean Young on November 19, 2001, in Las Vegas and they made Blackwell their home.

They enjoyed dancing and playing cards. She preceded him in death on January 22, 2012, and he continued to make Blackwell his home. George was a member of the Veterans of Foreign Wars, American Legion and Disabled American Veterans. He also served on and was elected chairman of the Blackwell Museum. He is survived by two daughters, Virginia Lawton of LaVista, Nebraska, and Ruth Ann Glaze of Wichi-ta, Kansas; two sons, Thomas Glaze and William Glaze, both of Wichita, Kansas; a brother, David Glaze of Norman; four grandchildren; thirteen great grandchildren; and one great great grandson. He was also preceded in death by his parents; a son, John Glaze; a daughter, Susan Glaze; a brother, Thomas Glaze Jr.; and two sisters, Mary Abner and Jesse Silver.

A funeral mass is scheduled for 2:00 p.m., Friday, August 13th in the St. Joseph’s Catholic Church in Blackwell with Father Balaswamy Bathini officiating. Burial will follow in the Blackwell Cemetery with military rites performed by the United States Navy.

Memorials have been established in his honor with St. Joseph’s Catholic Church or the Top of Okla-homa Historical Society in c/o Roberts and Son Funeral Home, 120 W. Padon, Blackwell, Oklahoma 74631. On-line condolences can be made at www.robertsandsonfh.com

How do you deal with being overwhelmed? is it G...

Looking Back- Thinking Forward: We must support...