Review: CANDYMAN is a terrifying, fascinating look at cultural trauma 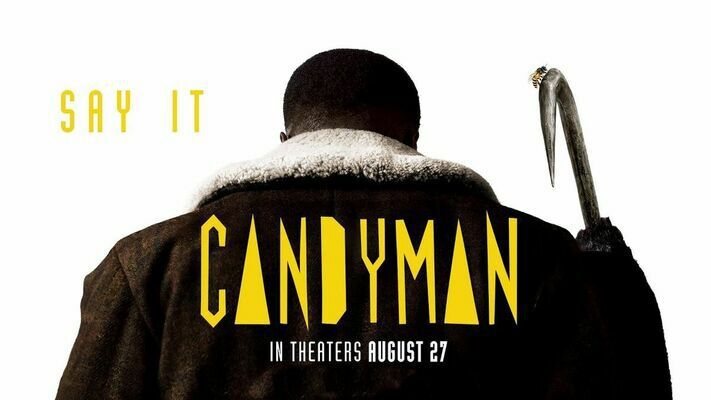 Nia DaCosta’s CANDYMAN opened this past weekend after several pandemic-related delays to just over $22 million dollars which is great news for the fluctuating market of film releases. The horror film’s stellar opening also positioned DaCosta as the first black female director to have a #1 film at the U.S. box office.

Following the 1992 original, CANDYMAN drags the audience back to Cabrini-Green, once an apocalyptic looking ghetto high-rise in the heart of Chicago now reduced to a few abandoned fenced off blocks, surrounded by sleek and modern apartments, up-start businesses, Instagrammable coffee shops, art galleries, and other omens of rapid gentrification.

The story is told through struggling artist Anthony McCoy (AQUAMAN and HBO’s Watchmen star Yahya Abdul Mateen II) and his girlfriend Brianna Cartwright (CHI-RAQ’s Teyonah Paris) who have just settled into their upscale condo in the former Cabrini-Green where one night of ghost stories introduces Anthony to the dark history of their neighborhood where, in the 1990’s, a aspiring grad student named Helen Lyle allegedly kidnapped a woman’s infant child, beheaded her dog, and attempted to sacrifice the baby to a local bonfire.

Fascinated by Helen Lyle’s story, Anthony journeys into the fenced off and abandoned neighborhood left of the old Cabrini-Green where he meets a weathered laundromat owner named William Burke (The Walking Dead’s Colman Domingo) who tells him that Helen lost her mind in the search of an urban legend known as “Candyman”, the monkier given to a hook-handed supernatural entity that was responsible for a series of unexplained and horrific deaths that followed when his name was spoken five times into a mirror.

Anthony soon begins to lose his mind as he obsesses over Candyman, the legend soon taking over his art and his life. Then, when gruesome killings begin to happen across Chicago following the same pattern as Candyman, Anthony realizes that some stories might be better left untold.

CANDYMAN, written by DaCosta and overnight horror sensation Jordan Peele (US, GET OUT), is a story about legacy, art, and cultural pain. It is also incredibly well-directed with performances that get under your skin. Early in the film, Anthony is stung by a bee while roaming Cabrini-Green. This bee sting mutates, and spreads, turning his wrist- then arm- into a sickening wet appendage of gore that begins to resemble a gruesome honeycomb. The film, much like that sting, ingrains itself into you, unable to be peeled away.

It’s a festering wound of a film, leaking puss and blood, that makes you uncomfortable as much as it does delirious. As Anthony is told the story of Candyman- the legacy of the Candyman- his eyes widen in horror and intrigue, and at the same time the audience finds themselves as lost and feverish as our protagonist.

In the 1992 original, Candyman was the vengeful spirit of a slave in the 1800s. Daniel Robitaille (Tony Todd) was a painter who would do portraits for wealthy (white) families until he fell in love with a rich businessman’s aristocratic daughter. The two had an affair, and Daniel was lynched. Brutally tortured, he had his hand severed and a hook shoved into the bloody stump before he was slathered in honey and stung to death by bees from a local apiary. His body was thrown onto a bonfire, and his ashes were scattered to the grounds of what would become Cabrini-Green.

In this, we’re told through an expertly done flashback sequence involving the laundromat owner Burke as a child, the Candyman is Sherman Fields. A handicapped black man who passed out candy to the children of Cabrini-Green until he is accused of being the one responsible for razor-blade laced candies that got into the hands of a young white girl. Fields is beaten to death by police officers and, not surprisingly, wrongly accused as the razor blade candy continues to circulate.

CANYDMAN, similar to 2019’s SCARY STORIES TO TELL IN THE DARK, is a film about how stories can contextualize pain. How stories evolve over time to reinterpret generational horror. Nia DeCosta’s film achieves this in a literal narrative way and also a more meta way. We, the audience, saw the original Candyman and witnessed the horror of a racially charged killing in the 1800s and how that echoed through time to the 1990’s.

Now, we see the brutal killing of an innocent black man, and understand how that story replaces and enhances a centuries old ghost story for a new era. This, in essence, is what leads to the film’s chilling climax that must be seen- and felt- to be believed.

Perhaps CANDYMAN’s greatest cinematic achievement, besides the dizzying and ominous crawl through Chicago’s skyline in the film’s opening credits and an insanely well-shot murder scene in a mirrored art gallery, is the film’s usage of shadow puppets to tell the story.

The closing credits showcase the various “Candymen” through the years- black men murdered in hate that have their name added to the list of identities- all sent to the completely spine-chilling music of Philip Glass. His entrancing orchestral sound, heard in the original Candyman, plays over a harrowing shadow puppet show that kept me in my seat until the lights came up. It was that damn good.

CANDYMAN demands to be seen, and does wonders for the kind of artistic obsession and impulses we all might feel, while also showcasing how transformative (and destructive) that very art can be.

CANDYMAN is now playing in Stillwater and Ark City