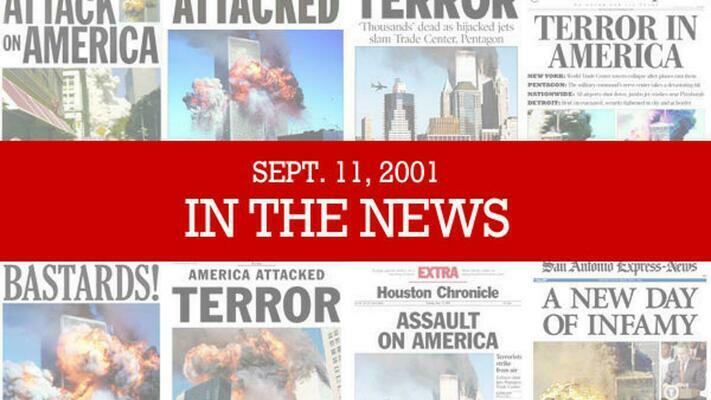 Not much time passed before the news of the Sept. 11, 2001, terrorist attacks in New York reached Blackwell. That afternoon, this headline spread across the front page of The Blackwell Journal-Tribune in large, bold type: “World Trade Center Attacked.”

The story beneath that headline gave the details of the horrific terrorist attacks, the worst in the history of the United States. They would dominate news coverage for days, even here in the Heartland. With the 20th anniversary of the 9/11 attacks just a few days away, we at The Journal-Tribune are taking a look back at those events – and more importantly, how we’ll always remember them, in large part thanks to news reports from the time.

Newspapers create the first draft of history, and this duty wasn’t lost on this newspaper. For weeks, The J-T published numerous stories from news services such as the Associated Press, one of the nation’s premier newsgathering sources. It also printed photos of the scene of the attacks. In the Sept. 12 edition, a wide, blackand-white picture shows the second plane crashing into the Twin Towers.

The headline: “Terror.” Enough said. The J-T didn’t just run stories from New York, though. Its intrepid reporters and editors went out into our community and wrote about how people here at home were affected.

The afternoon of Sept. 11, the paper reported that local Red Cross official Kathy Hawkins was asking residents to donate blood.

“‘The terrorist attacks in New York City will have a devastating effect on the nation’s already short blood supply,’” Hawkins told reporters. “It will take months to replenish the supply of blood nationally, and we urge everyone to consider taking the time to give this gift of life.”

Blackwell leaders used the paper as a platform to share messages of mourning.

Sally Norris, then Blackwell’s city manager, wrote in her weekly “City Talk” column on Sept. 14: “Every city employee is feeling the disbelief, the shock and sorrow that comes with knowing America (our home) has been attacked. To think, let alone accept that ‘terrorists’ can destroy innocent lives, on American soil, is unthinkable. “This tragedy particularly touched the Blackwell firefighters. Every time a firefighter is killed, our firefighters mourn with their families.”

Shana Haines, the paper’s managing editor at the time, reported that law enforcement officials were ramping up security measures at the petroleum refinery in Ponca City. The economy wasn’t the only part of our world that was affected. Not even sports could escape the aftermath. Local high school sporting events were canceled and postponed. “It was inevitable,” former J-T Sports Editor Daniel LeFebvre wrote in a Sept. 15 story. “With cancellations taking place around the nation due to the terrorism bombing, it came as little surprise to hear that the Maroons’ combat against their largest rival tonight was postponed one day, according to Blackwell High School Principal Dan Bringham.

“Perhaps it was baseball that was most affected by the sudden withdrawal of games so quickly, but none seem to care. Interviews with many players proved results that they found it hard to keep their minds on baseball, as there were more important things going on. “When the World Trade Center was struck by two planes on Tuesday morning, all around the world it seemed as if time stood still. For the most part, it did.”

Days later, The Journal-Tribune told the story of Blackwell native Barbara Ball Gilbert and her husband, Robert, who were visiting Arlington, Virginia, when the attacks happened. Barbara Gilbert told the paper she heard the blast at the Pentagon from her hotel room.

“‘People began to pour out of buildings,” she said in a Sept. 18 story. “‘The highway outside our window was filled with people fleeing the Pentagon. People were pouring out of the subways and walking home. We saw lots of emergency vehicles. The sounds here were pretty strange.’”

But even amid the national disaster, The JournalTribune didn’t just report stories of sadness and sorrow. After all, the Kay County Free Fair was in town. In spite of everything going on in the world, photos of happy, smiling children and their families filled the pages of the paper. Most pictures were taken by the late Charles “Scoop” Abbott, a legendary editor at The J-T. The paper told stories of hope, too.

The Sept. 18 issue carried a story about a prayer event called “See You at the Pole” that was set to take place at local schools the next day. On the same front page was a photo of workers at the local hospital. They gathered in a circle and held hands. A large American flag flew in the background.