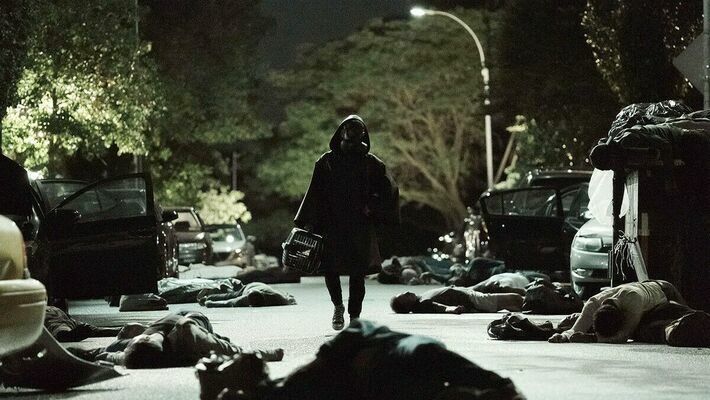 “Would she be pretty? Would she be thin? Would the world be kind to her- or would it make her feel small?”

One day, without warning, all the men died. Every mammal with a Y chromosome dropped dead except for one man, an amateur escape artist named Yorick Brown (Ben Schnetzer), and his pet capuchin monkey, Ampersand.

Women inherit the Earth while the United States (and world) are thrown into utter disarray as they all ask the same question: “What now?”

With the line of succession decimated, Yorick’s mother Senator Jennifer Brown (a subdued and raw Diane Lane) is now the President of the broken United States where she enlists the aide of a mysterious secret agent code-named 355 (Ashley Romans) to find her daughter in New York City, Hero Brown (Olivia Thirlby). What 355 finds, instead, is Yorick.

Smuggling him back into the Pentagon and realizing the danger Yorick would be placed in surrounded by various paranoid women with their own motives of power- including the former President’s daughter attempting to dethrone Jennifer- President Brown sends Agent 355 and her son, the last man on Earth, to Boston to find a controversial geneticist named Dr. Mann to find out what happened and why Yorick and his monkey survived.

After a decade in various stages of development, Brian K. Vaughn’s game-changing 2002 graphic novel series “Y The Last Man” has landed on FX on Hulu, the streaming branch of the FX Networks, and the good news is that the series takes the 20 year old comic and radically updates and- in some cases- improves upon it for today’s world and audiences.

While Vaughn’s graphic novel was a colorful, gallows-humor, globe-trotting romp that pioneered the “comic books for adults” movement, the FX series takes a more somber post-apocalyptic approach where every inch of the frame is filled with grim reminders of a world gone and where every character is struggling (or failing) to compartmentalize their survivor’s guilt and to adjust to the “new normal”.

We see dead bodies decaying in their cars and office buildings, and even in the Pentagon offices there are entire sections of the sprawling complex that are locked down and off limits where corpses fester and rot at their desks. Who has time to tend to the dead when the living are almost worse off?

Women huddle together in camps, trading generators and shoes for antibiotics. New York is sinking into the ocean with no man-power left to run pumps and keep the infrastructure running. Highways and interstates are clogged with the metal tombs of the dead, making transportation and trade nearly impossible. And to make matters worse, a group of marauders calling themselves The Amazons are roaming the country on horseback, locked and loaded, believing the plague was an invitation for the superior sex to finally rule.

“Y: The Last Man” hails from show-runner Eliza Clark who helped to script the first two episodes, and she does a fantastic job showcasing the ripple-effect that the global die-off would have on nearly every facet of life. The comic is my favorite of all time, but re-reading it recently it was obvious that writer Vaughn was more concerned about the story than the setting.

Where the comic spends all two issues having Yorick meet his mother and being sent off with 355 to find and meet Dr. Mann and glosses over most of the political/societal effects of the global death, the TV series soaks it in and revels in it. That isn’t to say it is boring, but the show does a better job at showing the absolute despair and misery of the world.

All the men are dead, so now society is girl-power and rainbows, right? Wrong. So very wrong.

The male lead, Schnetzer, is sexy and goofy while also being a ridiculously infuriating man-child which immediately causes problems for Yorick and Agent 355 and leads to a few explosive exchanges but the really impressive feature of “Y: The Last Man” is how, in just 4 episodes, the series has drastically improved and evolved.

Wherever the series goes now is almost limitless.

“Y: The Last Man” airs new episodes every Monday on FX on Hulu.