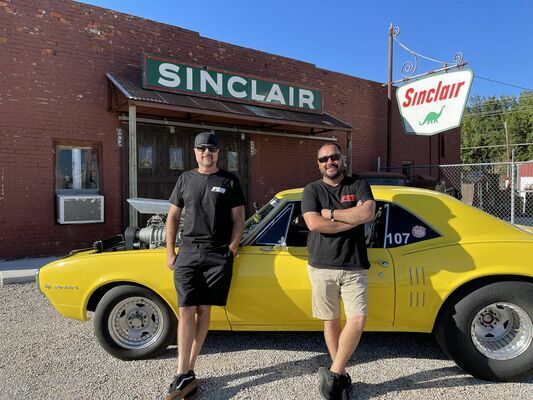 If you cruised down Main Street on Thursday afternoon, chances are you might have pulled up next to a classic muscle car – or a couple hundred. Rocky Mountain Race Week 2.0. stopped by the old Sinclair gas station on South Main Street, next door to The Blackwell Journal-Tribune’s office, to pose for photos.

About 250 drivers took part in the Race Week event, including the stars of MotorTrend TV’s “Roadkill” series, Mike Finnegan and David Newbern. Finnegan, said the retro Sinclair station was chosen as a “milestone photo” opportunity. All the drivers must stop and take a photo there, verifying they were at that location on the route.

“These are all chosen at random to prove you’re on the route,” Finnegan said. “It just so happened this one was right here in Blackwell.

It’s awesome when our route takes us through small towns and cool places like this that are a bit off the beaten path. It’s a great way to see things you might not ever get the chance to see.” The competition is a five-day, 1,300-mile trek across multiple states, with a drag race taking place at the end of each day. The locations for the 2.0 Race Week were: Thunder Valley Raceway Park in Noble; the Texas Motorplex in Ennis, Texas; the Tulsa Raceway Park in Tulsa; and the Geuda Springs, Kanas, Mid America Dragway.

Participants return to Noble for the final race. Competitors must drive their cars between tracks without the help of support vehicles or chase vehicles. Multiple classes fit a large variety of cars, from six-second bruisers to rat rods and everything in between. “You’ll see a lot – or all – of these cars hauling personal trailers with them,” Finnegan said.

“That’s because they’re not allowed any help or support besides what they can provide.” Blackwell was the crew’s last stop on the way to Geuda Springs.