THE MANY SAINTS OF NEWARK is a haunting "Sopranos" love letter 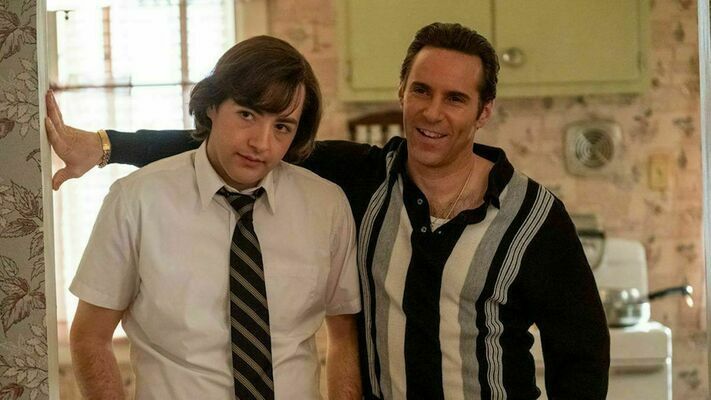 “It’s the wanting. All life is pain. Pain comes from always wanting.”

One family ruled the streets of New Jersey in the summer of ‘67, the haunting poster for THE MANY SAINTS OF NEWARK tells us. We see, in the 2 hour drama that acts as a prequel to HBO’s “The Sopranos”, that the summer of love was anything but.

NEWARK opens on the eve of the 1967 Newark Riots where we meet Dickie Moltisanti (Alessandro Nivola) a soldier for the Soprano Crime Family. He takes his nephew Tony to meet Dickie’s father (Ray Liotta) fresh off the boat from a tour of Italy where he’s returned with a beautiful young wife straight from the old country.

This sets in motion a chain of events- big and small- that effectively culminates with how Tony Soprano came to be the fearsome and erratic leader of the Soprano Family in the 1999 drama that ran until 2007.

Dickie has to contend with the rise of black organized crime, partially funded by real-life gangster Frank Lucas (famously played by Denzel Washington in AMERICAN GANGSTER) who is battling the Italians through the leader of the Black Saints, a vengeful man named Harold McBrayer (Leslie Odom Jr) who was once Dickie’s right-hand man.

While trying to maintain the loosening grip that Italian crime families have on the changing world, Dickie also has to fight his own battles staying with his girlfriend (Michela De Ross) and his wife (Gabriella Piazza) and, above all else, being a mentor to his nephew Tony (Michael Gandolfini, filling his late father’s legendary shoes).

Alan Taylor, who helmed several HBO hits including “Game of Thrones” and “The Sopranos” as well as films like TERMINATOR: GENISYS and THOR: THE DARK WORLD directs NEWARK off a script by Sopranos creator and writer David Chase (with Lawrence Konner) and gives us a film that feels like two really good episodes of the TV series with shades of more contemplative fair like THE ASSASSINATION OF JESSE JAMES, a 2007 Brad Pitt western that delved into dark and thought-provoking territory regarding how we treat our “heroes” and how they, themselves, live with their dual-lives of being public and private martyrs.

I’ll say this short and sweet: If you aren’t a fan of The Sopranos, your mileage here will vary. NEWARK stands on it’s own well enough as a crime drama, but it is enhanced especially by the audience’s love of The Sopranos. There are more call-backs (or rather, call-forwards) and hints of things to come that you can catch in one sitting.

Like David Chase’s acclaimed HBO drama, NEWARK is at it’s best when it is breaking the normal confines of what the audience expects from Italian mobsters. There’s plenty of laughs here, like the show, but there’s also the series’ moments of fantasy and introspection.

Crucially, the best scenes in the film are shared between Dickie and his uncle that may or may not be all in Dickie’s head. The Sopranos is a show that makes ghosts and visions real and prophetic, and it is in these haunting exchanges that the audience feels mystified, like they’re watching something hazy, just out of focus.

The cast also includes Vera Farmiga (The Conjuring films) as Tony’s mother Livia. To say Farmiga steals the show would seem disrespectful to the work done here by Nivola as Dickie or Corey Stoll as Junior, but Farmiga absolutely kills it.

Ray Liotta, also, gives a performance(s?) that is both loud and quiet. He is a perfect storm on screen, and almost assuredly nets himself an Oscar discussion for a supporting performance.

The film’s ending- Hell, the last 15 minutes- are gut-wrenching. They’re the smoking barrel of a two-hour long gunshot, and when the theme for The Sopranos begins to thunder throughout the screen, you get chills and immediately want more. And the good news is that the film, and cast, all lend themselves to an open door. Perhaps this isn’t the last we’ve seen of these saints.

GHOSTBUSTERS: AFTERLIFE is "The Force Awakens"....

Off the Rails: A journey on Oklahoma's tracks