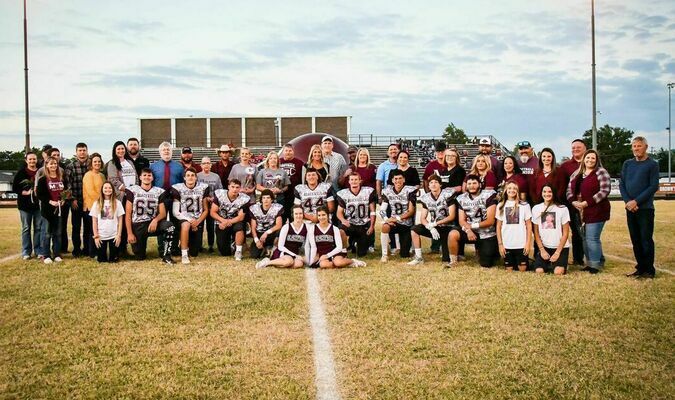 The Blackwell Maroons celebrated Senior Night in a big way on Oct. 22 when they beat Chisholm 50-14 in Blackwell. The win is the Maroons third in a row as they improve to 3-5 overall and 3-2 in district play.

A play-off spot is on the line Friday night in Alva (2-6,1-4). The Maroons need a win to secure fourth place in District 2A-1. Alva is out of the play-offs and would love nothing more than to play the spoiler roll in Week Nine of the season. Hennessey is also 3-2 in district play but plays undefeated Oklahoma Christian School Friday night. The Maroons hold the head-to-head tie breaker advantage.

“We have figured some things out as a team and we are playing much better than we did at the beginning of the season,” said Maroons Head Coach Brent Parker.

The Maroons have discovered a running game this year that is working real well right now. The Maroons ran the ball 40 times for 454 yards in the Chisholm game and attempted one pass.

Senior Christian Mora scored four touchdown and kicked three extra points to lead the offense. Mora ran for 34,34,13 and one yard for his four scores and had a 77-yard run that set up the short one -yard run. Freshman Kruz Goff ran for 64,30, and 24 yards for his three scores and had two successful 2-point conversions in the game. Neither running back played in the fourth quarter.

On defense, the Maroons had three fumble recoveries and two interceptions to win the turnover battle. Junior James Tripp playing defensive end got high praise from Parker for his eight tackles, two sacks, a fumble recovery and a fumble caused in the game.

The Maroons will kick-off at 7 p.m. in Alva.

Maroons battle as O'Dell wrestles gold from Per...