Mike's Musings: Who gets into Heaven? 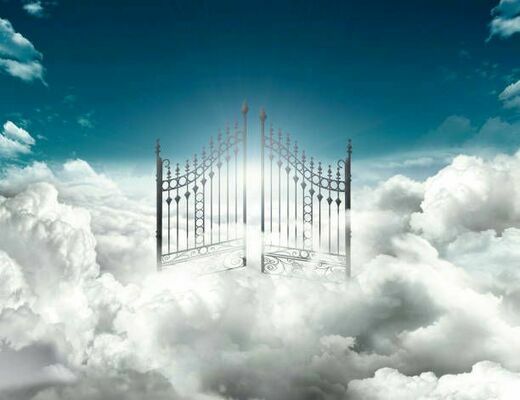 Well, here we are again with another round of the guessing game "What

season is it?". We have had hot, cool, and moderate temperatures in the

past few weeks. The rainfall has been just as uncertain depending on where

you are in Kay County. When it comes to seasons, you would think we would

just move along and not give much thought to the conditions, but most of

us don't. We like to cuss and discuss why the weather is such and such.

to control the weather. The real question is who are we really fooling? Dare

control and then get upset when we realize we can't do anything about it?

Control is one of things people like to think they have mastered.

around them, or that nothing can upset their plans for the future? It is

The other side of the coin finds people

better. To both of these groups of people I would offer advise that says

In the Bible, Mark chapter 10 reveals some truths that are as timely

today as they were when Jesus walked the earth. One of the people

mentioned in this set of verses was wealthy man. It seemed he had everything going

He asked Jesus what he needed to do to gain eternal life. Jesus

told him to sell all of his worldly goods and follow Him(Jesus). The Bible

to give up his possessions. So he didn't. It was an example of how you

think you're in charge but really your not. As we all know, the man

couldn't take it with him when he died.

Bartimaeus who was blind. When Jesus was in Jericho he crossed paths with

Bartimaeus. Bartimaeus called out to Jesus but the people surrounding him

told him to be quiet. They felt Bartimaeus, being handicapped and poor,

had no right to call to Jesus. But they were wrong. Jesus heard the cry from

the crowd and asked who it was and what he wanted. Based upon faith,

Bartimaeus told Jesus he wanted to see. After he was healed, the story

tells us that Bartimaeus followed Jesus.

is rich and one is poor. There are other differences besides wealth and

poverty, but if you think this is about possessions and money, your wrong.

eternal life, but just because someone is poor doesn't make them

automatically qualify for Heaven. It all is dependent on what is most valuable in

one focus then your priorities are correct.

GIVE UP! Unlike blind Bartimaeus, many people have decided that things

around them will never get better. They don't know which way to turn or

quick way to go. They feel that life has defeated them and they are doomed

to never know a better life. Bartimaeus could have easily been like that,

but he wasn't. He could of felt sorry for himself and stayed a blind

beggar with no hope. Fortunately he didn't. He had heard about Jesus and believed

that Jesus had the power to make things better, to give him sight, and so

things in our lives. The scriptures tell us that God is the same today,

yesterday, and tomorrow. That indicates to me that even though we think we

are very different from our ancestors, in reality we are not. Yes in many

ways our world and our surroundings are different, but our needs are not.

and help us through the issues we deal with. He helped Bartimaeus and he

will help us if we have the faith to call on him.

If you don't know Jesus Christ as your Lord and Savior, ask him to

come into your heart, forgive you of your sins, and accept him as the One

who will grant you eternal life. If you have already accepted Jesus as

your Lord and Savior, then don't give up when your in need. Continue to call on

his name, never giving up. He loves you and me. Peace and grace to all.

Live Nativity coming to Blackwell for one night...