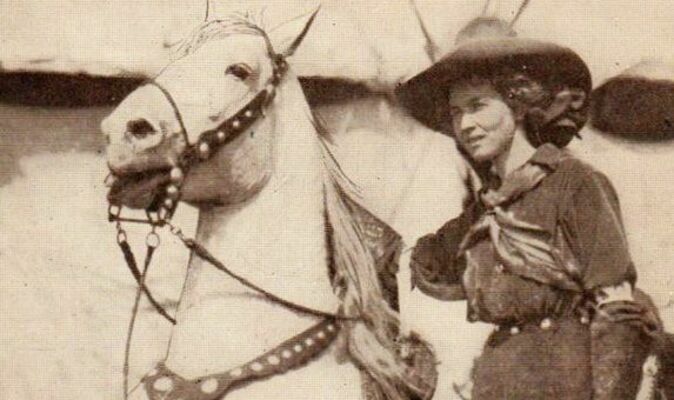 They were sometimes billed as the “sauciest, happiest, loveliest assemblage of femininity that ever galloped.” ‘They’ were the troupe of cowgirls during the hey-day of the 101 Ranch Wild West Show. Many of them became nationally known stars and all were household names among the multitude of fans who followed such shows in the early 1900s.

Oddly enough, the Miller brothers began their Wild West Show venture unintentionally. Hoping to promote the ranch and its business enterprises nationwide, in 1905 they persuaded the National Association of Newspaper Editors to hold their convention in Oklahoma. That event included a visit to the 101 Ranch where the Millers entertained them with a rodeo. When the dust settled, a reported 65,000 visitors had attended the affair, so the Millers decided they should take the event on tour, thus launching them into the world of show business.

The very first “101 Ranch Wild West Show” held in 1905 starred several cowgirls. Among them the renowned Lucille Mulhall whose family had moved to Oklahoma Territory from St. Louis in 1890. The Mulhalls eagerly embraced ranch life and Lucille’s father Zack began staging roping and riding contests that featured his own children. By age ten, Lucille was considered a top cowhand, and even though her mother tried to raise a “proper lady” by sending her to boarding school in St. Louis, Lucille wanted only ranch life. Her father gave in to her pleas to come home and enrolled her at a private school in nearby Guthrie so she could visit the ranch on weekends.

In 1899, “Colonel” Mulhall, as he was known by honorary title, started his own traveling troupe called the “Congress of Rough Riders and Ropers.” The show starred Lucille who rode her trained horse, “Governor,” dubbed “The Wonder Horse” by her adoring public. The same year, the family was invited to play the county fair in St. Louis where Zack Mulhall signed a young, mixed-blood Cherokee trick roper named William Penn Adair Rogers, later better-known as Will Rogers. It was Rogers who described Lucille Mulhall as the “world’s first cowgirl and greatest rider of all time.” Lucille went on to fame as a world champion roper and the only woman to rope steers competitively with men.

Among star attractions at wild west shows were “trick” shooters, and few were better than Lillian Smith. Although not all her sharpshooting feats were performed from the back of a horse, Lillian’s talent had been evident from childhood. Born in 1871 in Coleville, California, her father once recalled that while most kids in the countryside around Coleville were all “little William Tells,” he was more than a little surprised to see his six-year-old daughter shoot and kill a sparrow on the wing with a simple bow and arrow.

During her teenage years, Lillian came to the attention of Buffalo Bill who gave her the show biz name the “California Girl” and billed her as the “World Champion Rifle Shot.” Later, when Lillian signed on with the 101 Wild West Show, Zack Miller began billing her as an Indian Princess named “Wenona.” Miller’s publicity people even concocted the story that, as a child, she had been kidnapped and adopted by Chief Sitting Bull.

For thirteen years “Princess Wenona” thrilled audiences with a routine that was unmatched in the world of trick rifle shooting. Some of her records still standing include consecutively hitting 323 glass balls thrown in to the air which ten-year-old Lillian broke using a .22 caliber rifle. Later on, she broke 495 out of 500 glass balls. She also hit 300 swinging balls in 14 minutes and 71 out of 72 balls thrown in the air while she rode a horse.

When she retired in 1920 after a tumultuous life that included several failed marriages, “Wenona” wanted the world to know who she really was when she died. Her will declared the desire to be buried under her real name, yet it was seventy years after her death before a monument was placed at the Ponca City IOOF Cemetery which properly inscribed the stone of the sharpshooter known as “Princess Wenona” with her birth name, Lillian Smith.

Among other 101 Ranch Show cowgirls was Mary Ellen Laird known as “Jackie” to her public. She got into show business at age eleven after running away from home to join a circus where she performed as a trick rider. Jackie signed on with the 101 Wild West Show when she was twenty-three and was lead rider of the show’s cowgirls. She always wore her trademark wide-brimmed Stetson, buckskin skirt, silk blouse, wide-cuffed riding gloves, and expensive hand-made boots.

In one of her acts, Laird leaped back and forth between four horses as they circled the arena, but her finale was the so-called “tail back.” It involved sliding off the back of a galloping horse and being dragged around the arena. She performed with the 101 for twelve years, headlining one of its most popular acts.

As strong and rugged a woman as was trick rider Jackie Laird, few women could equal the toughness and resilience of Bonnie McCarroll. Born on a cattle ranch near Boise, Idaho, in 1897, she always wanted to ride broncs and wound up winning two major cowgirl bronc riding championships. Her first at Wyoming’s Cheyenne Frontier Days, and later at the first rodeo hosted in New York’s Madison Square Garden.

At the Pendleton Roundup in 1915, her first year of rodeo competition, McCarroll attracted national attention from a photograph of her being thrown from a horse and turning a complete forward somersault before landing on her back. She walked away from the appalling tumble unphased and went on to a career performing with the 101 Show and other expositions playing in front of kings, queens, and U.S. Presidents.

Fourteen years after the vicious throw from the bronc at the Pendleton Round-Up, McCarroll returned there for her final competition before retiring. The 1929 event was her last ride when she was violently bucked from a horse only to have the animal fall on top of her. McCarroll was rushed to a hospital but died later of spinal wounds and pneumonia. The resulting public out-cry prompted the Rodeo hierarchy to prohibit women from future bronc riding competition. The ban was held for many years until recently when female competition began again on a small scale.

Bessie Herberg was born Betty Herberg in Pipestone County, Minnesota, in 1896. The adventuresome “Bessie” was only sixteen when she signed on as a “cowgirl” with the 101 Ranch Wild West Show in 1911. Just before the show tour started Bessie wrote home to say: “I don’t think I will stay as it is too hard for the money there is in it, but will have to stick with it for a while to pay back my fare.” Yet, stay she did for the rest of her life.

With a flair for sporting buckskin attire, which earned her the nickname “Buckskin Bessie,” the fair-haired Bessie and her horse “Happy” were show crowd pleasers for many years. She was also ‘pleasing’ to the eldest Miller brother, Joe, who fell hard for the young blonde. The two of them were inseparable on show tours, and Joe made sure Bessie got the best billing and most desirable parts in feature films the 101 produced.

Naturally, the affair with Bessie did not set well with Joe’s wife Lizzie, and was even more distasteful to his mother Mollie, who made sure Joe was excluded from her will. He finally promised to give up the affair, but made sure Bessie was well-taken care of. The two of them pursued a couple of joint ventures in the cattle and oil business, and Joe bought Bessie a small ranch near the town of Bliss, calling it the “50-50” ranch. Eventually they went their separate ways, and in early 1930s she married Marshall Blackwell. The couple operated a general store south of Ponca City, but in 1943, a suspicious fire burned down the store, tragically killing the forty-seven-year-old Bessie who was in it.

An easterner named Jane Woodened was the most unlikely inclusion among the 101 Ranch cowgirls. Born Jennie Louise Howard in New York in 1875, her father was a physician and bank president, and her mother was a wealthy real estate heiress. Jennie grew up riding show horses and became the belle of equestrian events from London to New York. She married a well-to-do physician named Woodend, and parlayed her inheritance into an even greater fortune in the stock market until the financial panic of 1904 when the Woodend’s lost almost everything. A short time later, Jennie became ill and was told she needed the clear climate of the West to regain her health. Tom Mix, whom she met at a Wild West show playing in New York, suggested she visit the 101 Ranch in Oklahoma.

Initially, Jennie temporarily moved to Oklahoma, taking her maid and invalid brother with her, but after few summers there she decided to join the 101 Ranch Wild West Show as a trick rider calling herself Jane Howard. It was only by accident during a 1911 performance in Brooklyn that her true identify became known. She was slightly hurt when thrown from her horse, and when news reporters learned her real identity, New York headlines declared: “Mrs. Woodend a Cowgirl, Accident Reveals Secret.”

In time, she became estranged from her husband and permanently moved to the 101 Ranch where she was known by her married name, “Jane Woodend.” She bought a small house near the town of Bliss where she could care for her brother, but by then her marriage had totally disintegrated and her husband cut off her meager allowance.

Jane turned to the Millers for help but instead of asking for money she applied for a job as a hired hand riding fences for thirty dollars a month. The Millers put her on the payroll and the former queen of New York Society became one of the best fence riders the 101 Ranch ever had. In the 1920s, a reporter asked Woodend if she missed her former life? She replied that moving to the 101 Ranch was the “smartest thing” she’d ever done, adding, “I’ve got everything on earth that I want here….”

The first 101 Wild West Show on thirty acres of pasture near the Salt Fork River in 1905, led to many years of national and world tours and launched the careers of several famous rodeo and motion picture stars. The “cowgirls” of the 101 Ranch and the history of the Miller Brothers 101 Wild West Show will be celebrated in Blackwell, Oklahoma, Friday and Saturday November 19 and 20, 2021 at the Kay County Fairgrounds Event Center. Ranch and show artifacts on display include some that belonged to the 101 Ranch cowgirls. Other Western memorabilia for viewing or sale include original cowboy gear, firearms, assorted antiques, rare photos and ephemera.

The show, presented by the 101 Ranch Collectors’ Association, is open to the public Friday 10am to 7pm and Saturday 9am to 4pm.