Off the Rails: A journey on Oklahoma's tracks 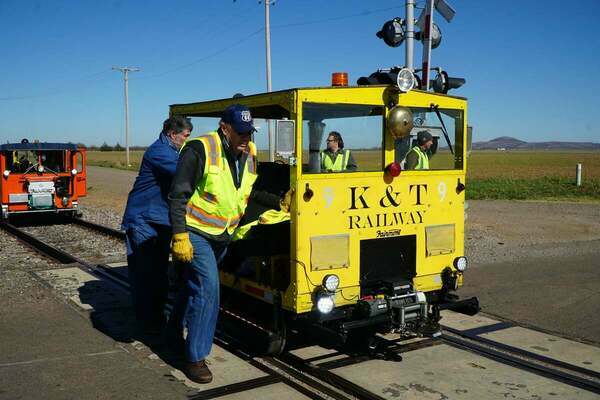 At 10:30 p.m. Nov. 6, I had no plans to ride a railroad speeder 120 miles through southwest Oklahoma the next day with a group of folks I’d never met. By 11:30 p.m., my plans changed. And the result was marvelous. On Nov. 7, I had the pleasure of riding a railroad speeder with some incredibly kind fellow railroad enthusiasts down a rail line connecting the southwest Oklahoma towns of Clinton and Roosevelt. The line, now operated by Farmrail, was once a Frisco route. It was an all-day trip, and it was worth every minute.

Not only because of the gorgeous scenery and the awesome speeders but because of the camaraderie we shared – and because of the powerful connections I learned I have to the line we rode. Let’s take it from the top. That Saturday night, I’d just gotten done taking pictures of trains about an hour south of Alva when I saw a Facebook post from a gentleman named Rhys Martin talking about a speeder excursion he’d been on through my hometown of Sayre. I had no idea the excursion was taking place, and I commented on his post, say- ing how I wished I could’ve been there.

That’s when the man Rhys rode with – a gentleman from Kentucky named Bill John-son –chimed in and offered me a seat in his speeder for the next day’s excursion. I’d have to be in Clinton by 7:30 a.m., and it was already near midnight. I’d have a two-hour drive down there. I wondered: Should I do it? Would this be too hasty? I phoned another rail-road friend of mine, Kelly Martin, to ask for some ad- vice.

Even though I had a mountain of homework to do Sunday, he told me this trip would be worth far more than any ‘A’ on an assignment. He was convincing, as always. I can’t “school” or work my life away, and I won’t. So, in no time flat, I’d set my alarm for 4 a.m. to make the drive from Alva to the Hub City of western Oklahoma.

I arrived a little before 7 a.m. Before long, Bill and his crew, including retired railroader Jim McCall, arrived. We took a safety briefing, and then we were off on an adventure through a handful of tiny towns. Bill’s speeder ran like a top. The engine hummed smoothly, and the clickety-clack of the tracks below as we rolled along made for an outdoor musical masterpiece.

She came out down to the tracks say hello, and we even managed to take a photo with the speeder I was riding. Now that’s fun. Cordell holds a special place in my railroading heart for another reason.

My first boss, Jim Corbin, was a railroad depot agent there when he was about my age. When I worked for him, he told me some hilarious – and sometimes scary – stories about his time working for the railroad. When I was in the speeder, I was rolling over the same track he once managed, where he hooped train orders up to locomotive engineers and conductors as they flew past the depot at lightning speed.

The depot no longer stands, but the stories remain. And if you like stories, here’s a story that’s almost unbelievable. The line I was riding on once ran all the way up to Arkansas City, Kansas – through Blackwell, where I live. Most of the line was torn up through the years, but some segments, like the one I was on today, still remain. And get this: the Blackwell Northern Gateway Railroad, where I’m a seasonal maintenance-of-way worker, still operates on portions of this line. I have worked on track that once connected to the line I rode in the speeder that Sunday. And better yet, that same line once cut through my family farm near Newkirk. So, I was riding a line that carried freight and passenger trains that once ran across my family farm some 200 miles away, and I have worked on some portions of that line. And my former boss once worked on it, too.

Oh, Irony! Even though I had connections to the line, I met someone who has an even more meaningful story about it to the line. A fellow speeder enthusiast from Oklahoma, Rick Syzemore, rode the rails that day. His father was in the maintenance-of-way crew that worked the entire line at one point or another. He not only worked on the section of line we rode, but he likely also worked on the sections of the line in Blackwell that I’ve worked on, and the section of line that shot across my family farm. Rick himself worked for the Frisco in Lamont, not far from Blackwell. Hearing his passion for this line, and hearing how much pride he had in riding the rails his father helped work on, was incredible.

He and his family took great pride in their work, and rightfully so. I can tell you all about the trip. But I still haven’t found the words to describe how perfect that day was. From my point of view, nothing went wrong. The weather was gorgeous, the sky was clear and blue, I was in the company of new friends, and I got to learn valuable history to which I have a personal connection. And that southwest Oklahoma scenery – from the rolling plains and pastures to the planted fields with green wheat to the picturesque Wichita Mountain range – was like a painting. The kind that you can never forget once you’ve seen it.

I can’t fully express my gratitude to the folks who made this day so exceptional. Their hospitality was remarkable, and the fact that they showed this kindness to a stranger … I just don’t have the words. This day will go down in the books as one of the best. Any day with railroading is a good day, but this one ranks even higher. Nothing could derail the joy of riding a speeder.