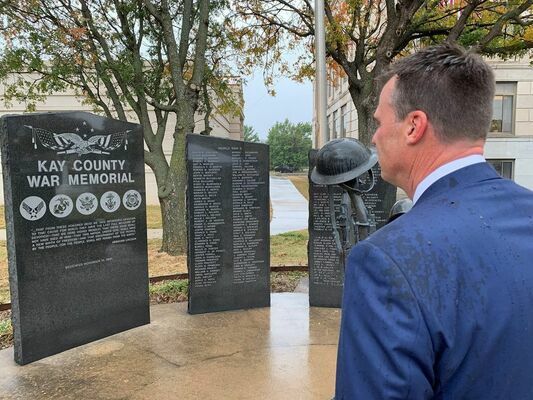 Stitt’s tour started with a trip to Tonkawa, where he spoke to a group of veterans. Among the group was 97-year-old Loren Fitzgerald, who served during World War II and was stationed at Okinawa when military forces signed the peace treaty ending the war, Stitt said in a Facebook post.

Stitt also toured the Kay County War Memorial and Walk of Warriors at the county courthouse in Newkirk.

“It was an honor to visit the Kay County War Memorial and Walk of Warriors the day before Veterans Day,” Stitt told The Journal-Tribune in a statement. “The reception I received from Newkirk residents is something I’ll remember for a long time. I also had the opportunity to shake the hand of World War II veteran Ralph Vickery who served in the U.S. Navy. It’s always special when you’re able to thank a World War II veteran for our freedom.”

The Walk of Warriors, a brick-paved walking path, was the brainchild of local 4-H member Hannah Cross, who wanted to honor area veterans. The project started in 2020, and hundreds of pavers bearing the names of veterans have been sold. The walk was dedicated in September of this year.

Stitt also toured the county courthouse, where new courthouse offices are under construction and remodeling work is set to commence.

“I’m glad I got the chance to tour the Kay County Courthouse before the planned renovations,” Stitt said. “It’s incredible to see the building preserved in its original condition when it was built in 1926, but I can’t wait to see what it looks like when the renovations are complete.”