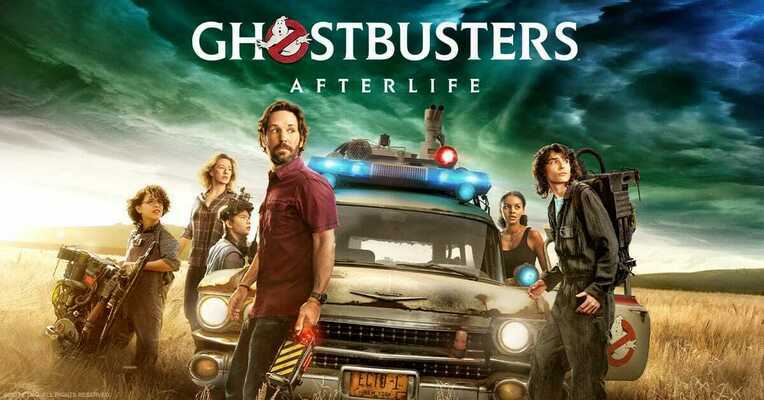 “Are you prepared to die?”

Sony’s GHOSTBUSTERS AFTERLIFE opened this past weekend as not just another notch in Sony Pictures' almost-perfect run of opening mid-budget films to great returns but as a textbook example of how to do the ever-popular “legacy sequel” the right way.

In short, this is Disney’s STAR WARS: THE FORCE AWAKENS if The Force Awakens was good.

Single mom Callie (Carrie Coon) moves her and her two children- the dweeby Trevor (Finn Wolfhard) and the geeky Phoebe (McKenna Grace)- to the “middle of nowhere”, a small town called Summerville, Oklahoma, after her reclusive father dies and leaves her his “dirt farm” outside of town.

Upon arriving, the family soon realizes their grandpa is none other than Egon Spengler, one of the original Ghostbusters, and he’s left cryptic clues to help his family from beyond the grave to avert a cataclysmic event that could open a portal to Hell on Earth.

While it’s easy to be skeptical of yet another cash-in on nostalgia, as has been the trend in Hollywood for years now with “sequels that continue the original and reboot it with hot young stars” such as the aforementioned “Star Wars”, the “Jurassic World” franchise, the “Jumanji” franchise, the new “Halloween” films, this summer’s “Space Jam” sequel, and many more to come, AFTERLIFE owes more to Sony’s own “Jumanji” than any others.

It is a direct sequel to 1984’s GHOSTBUSTERS that continues the story and characters of the original film in a meaningful and respectful way while also carving out it’s own footing with an exciting cast, good storyline, and a genuine sense of heart from director Jason Reitman, the son of the original film’s director Ivan Reitman.

First off, this completely ignores the critically panned 2016 all-female reboot. Second, it really is good, and this is coming from someone who’s fondest attachment to the Ghostbusters franchise was having the theme song as my MySpace profile song and winning $250 from a Ghostbusters machine at the Southwind Casino in Newkirk in 2013.

Reitman has a great sense of characters and capturing their nuances, with poignant dramas like Thank You For Smoking, Labor Day, Young Adult, Juno, and one of my favorite films of all time, Up In The Air.

Here, his lens is follows the ever-irresistible Paul Rudd and Carrie Coon as the “adult leads” and smartly puts Stranger Things/ IT breakout Finn Wolfhard second to young starlet Mckenna Grace who absolutely owns the film.

Her plucky “social recluse girl genius” character smartly avoids the common complaints levied against similar “inheritance” icons like Rey from Star Wars in the sense that while she is extremely smart, she is also allowed to learn and receive help.

Nothing comes completely natural to her, and goes a long way into her believably as a person and, by the end, allows her donning of the proton pack and Ghostbusters uniform to feel deserved and natural as opposed to...well… “Rey Skywalker” from THE RISE OF SKYWALKER.

I’d be remiss to say the film is not without flaws. It leans a bit heavy into the fan-service, such as the “Stay Puft Marshmellow” character returning and a not-so-subtle reinvention of the “Slimer” ghost.

The antagonist of the film is once again the ancient demon Gozer and the iconic Zuul Dogs from the first film, but the way Gozer is presented (an unrecognizable Olivia Wilde with an honestly awesome design) allows this film to get away with bringing back the first movie’s antagonist in a visually fresh and cinematic way.

In many ways, this is the long-gestating GHOSTBUSTERS 3 that was never made before Harold Ramis’ unfortunate passing in 2014. Everyone comes back, everyone matters, and everyone seems genuinely happy to be doing it.

While the complaints about the film rehashing so much of what came before it aren’t without merit, this is another example of the way the film seems to be antithesis of what Disney did in 2015 with “The Force Awakens.” When the Star Wars reboot was slammed for being a beat-for-beat remake of A NEW HOPE the promise was “it has to get the fans back to become something new.” And new it did.

2017’s THE LAST JEDI was an honest attempt to flip the script and dismantle Star Wars down to it’s core...and by the time THE RISE OF SKYWALKER closed the book in 2019, it was a complete mess of conflicting ideas, re-written plot beats, an awful handling of characters, and a genuinely baffling disaster of epic proportions.

Here, it seems, AFTERLIFE is set to correct the pitfalls of the Star Wars franchise. It genuinely feels like this dusty ghost of the 1980’s is back from the grave with a new life, a new sense of purpose, and a fantastic cast that are game for anything that comes next.

So, who ya gonna call?

GHOSTBUSTERS: AFTERLIFE is playing at The Hub in Tonkawa and at the Cowley Cinema 8 in Ark City.

YELLOWSTONE Season 5: How do I watch this thing...