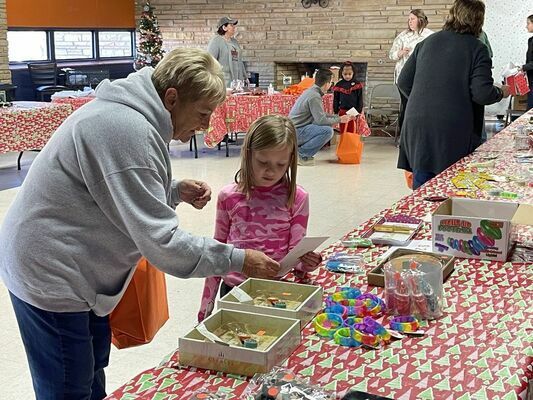 The Blackwell Area Chamber of Commerce conducted its Children’s Christmas Store at the Blackwell Youth Center on Saturday after taking a year off from the event because of the pandemic.

More than 100 children participated in the assisted shopping experience, allowing them to purchase gifts for their families with the help of others.

The store was open from 9 a.m. to noon. Just before 11 a.m., the youth center was crowded. Chamber of Commerce Coordinator Joyce Courtney worked to check everyone in and made sure children who came to the store would be accommodated.

The number of participants surged, Courtney speculated, because the store was canceled in 2020 as a result of the pandemic. It was the first time in the program’s history that it had been shut down.

“People really missed us,” Courtney said after the event. “I’m happy to say that we’re already planning for next year.”

Courtney said the Chamber of Commerce was grateful to the Blackwell Youth Center for allowing the use of the space.

“The Youth Center was amazing,” Courtney said. “Everything in there has been repainted and decorated. It looked wonderful.”

Blackwell’s FFA students, led by adviser Cheyenne Bergman, were the “personal shoppers” who helped children as they picked out gifts. Courtney praised the students.

“Blackwell’s FFA kids exemplified the kind of leadership that everyone should look up to,” Courtney said. “They were so great with the kids that came through, giving such a personal experience to every one of them. They helped to make these kids feel comfortable. They talked to them, assisted them. We wouldn’t have had such a fantastic experience without them.”

“Walmart [was] so kind with their donation,” Courtney said. “Without them, that would have been a lot of money that we would have been spending, and thanks to them, we didn’t have to eat that cost, which allowed us to break even and put our funds right back into our programs for the community throughout the year.”

The Chamber of Commerce recently helped conduct the Night of Lights Christmas Parade in conjunction with the City of Blackwell and Blackwell Tourism.

The Chamber’s next event will be its January banquet, which is also returning after a 2021 pandemic hiatus.