So, what's with the swastika on Doolin? 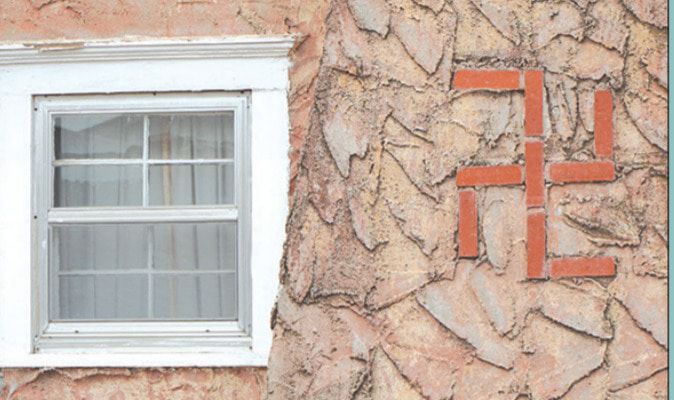 The time for a history lesson has come. If you didn’t read the widely-discussed letter to the editor in the Dec. 15 edition of The Journal-Tribune, you’re the only one. A couple who visited Blackwell from Iowa expressed anger over a symbol that looked like a Nazi swastika on the side of a house at 719 W. Doolin Avenue.

Yes, that symbol is a swastika – but it’s not the version the Nazi regime used to represent its campaign of genocide against Jewish people and its bloody crusade across Europe during World War II. A letter to the editor from a community member in the Dec. 22 edition of The Journal-Tribune helped clear up the controversy.

But more information about this symbol is needed, and that’s what this story aims to provide. The overarching message: the symbol in our midst is not the same one that represented some of the worst crimes in world history.

Before the Nazis hijacked the symbol, the swastika was used by Native American tribes to represent peace and good will. It was also used as the official insignia of the U.S. Army’s 45th Infantry Division, which had an armory across the street from the house for decades. (The building is now the City of Blackwell’s Streets and Parks Department headquarters.)

So, what did the swastika mean before the Nazis stole it? The exact opposite of what they construed it to mean. The swastika, also called the “hooked cross,” became popular in Europe in the early 20th Century before Nazi dictator Adolf Hitler used it, according to information from the United States Memorial Holocaust Museum.

“The word ‘swastika’ comes from the Sanskrit svastika, which means ‘good fortune’ or ‘well-being,’” Holocaust Museum officials say on the organization’s website.

“The motif (a hooked cross) appears to have first been used in Eurasia, as early as 7,000 years ago, perhaps representing the movement of the sun through the sky. To this day, it is a sacred symbol in Hinduism, Buddhism, Jainism, and Odinism. It is a common sight on temples or houses in India or Indonesia. Swastikas also have an ancient history in Europe, appearing on artifacts from pre-Christian European cultures.”

“A similar symbol was adopted by the Nazi party in the late 1920’s, and as the N.S.D.A.P. rose to power in 1933 the symbol became so closely associated with German National socialism that it had to be abandoned as the insignia of the 45th Infantry Division.” The 45th later adopted the Thunderbird insignia, which troops still wear today. Contrary to popular belief, the swastika the 45th wore had the same rightfacing orientation that the Nazi version did.

That means the swastika on the house here is both reversed from the Nazi version and the 45th version. The home appears vacant these days, and community members say the longtime residents have died. That leaves more questions than answers about why the swastika, made of brick, was built into the stone chimney.

One of the most plausible theories, as posed by some community members, is that a military officer may have constructed the house.

That still doesn’t explain why the swastika doesn’t match the 45th’s. But the biggest take-away is this: The swastika on the house in Blackwell isn’t representing or heralding the Nazi party. As a matter of fact, it’s a historic symbol of peace and good fortune – quite the opposite.