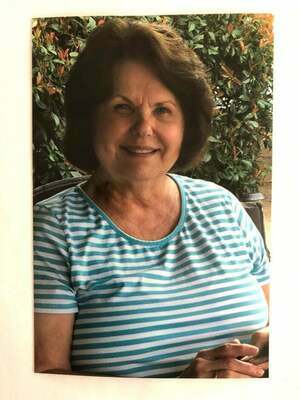 Linda Sue May, 73, resident of Ponca City, died at Alliance Health Center on December 18, 2021, after an aggressive lung infection. A Celebration of Life will be held for Sue on Saturday, January 15, 2022, 10 o’clock a.m., at Four Square Church, 700 W. Broadway, Ponca City, OK. Services will be conducted by Pastor Michael Cramer, Ponca City, and Pastor Blaine Herron of Salina, KS.

Sue, as she was known to her friends, was born August 23, 1948, in Ventura, CA, to Carmon and Dorothy Viola McClain May. At the age of 3, Sue moved with her family to Blackwell, OK. She graduated from Blackwell High School in 1966.

She lived and worked in Florida and Louisiana, making friends everywhere she lived. Eventually she made her home in Ponca City. Sue had a great talent for cooking and baking. If you were invited to her home for dinner, you knew you were in for a treat.

Sue belonged to several organizations including the Moose Lodge and held many offices within that group and attended many conventions but was most passionate about her Beta Sigma Phi sisterhood, an International social and service organization. She joined her first chapter in 1976. She held all offices several times and was, at one time, President of Beta Xi Delta chapter. Sue attained many degrees, her final being Torch Bearer, a prestigious degree.

Sue was an agent for the Ponca City tag agency. It was not surprising to be with her and have people that valued her tag agency abilities to have them stop her and tell her how much they missed her when she decided to retire in 2019.

Traveling was another passion Sue loved. A cruise to Alaska was one she marked off her bucket list. A trip to the UK including Scotland, Ireland, and London was accomplished in 2016 with sorority sisters and friends. She had a cruise planned in 2020 but the day before sailing it was cancelled due to Covid. The chapter went to Branson every November for fun-filled days and nights of shopping and going to the Sight and Sound Theater to watch their productions, and just being together.

She is survived by her sisters of Xi Delta, and her sisters of her glorious sisterhood, Beta Sigma Phi, close friends Dena McCloud and Vicky Hedrick, numerous nieces and nephews and sweet friends.

She is preceded in death by her parents, and brothers Paul, Ronnie, and Ricky.

A private graveside service will be held at the Roberts-IOOF Cemetery, Blackwell, OK, prior to her Celebration of Life.