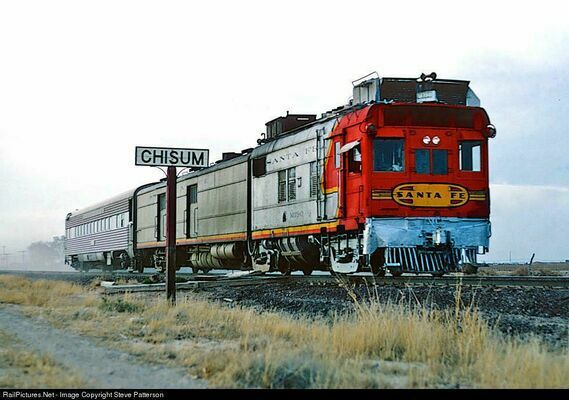 Once upon a time, catching the “bug” to travel meant more than having a desire to go somewhere. In Blackwell and countless other small towns across the Great Plains, the “bug” was less of a mood and more of a means. Because in these places, the “bug” was actually a train.

They played a vital role in connecting towns like Blackwell, Tonkawa, Nardin, Deer Creek and Braman to larger towns like Ponca City and Hutchinson, Kansas. Doodlebugs, powered by gas or diesel engines, carried passengers, mail and freight between towns. In a sense, they were passenger cars with their own engines.

If not for doodlebugs, folks in Blackwell and similar communities would have had few options for rail travel.

THE ROLE OF THE DOODLEBUGS

In rural areas, train travel was less romantic and more rudimentary. Popular mainline passenger trains in the Midwest like the Santa Fe Super Chief and the Texas Eagle didn’t stop in towns like Blackwell, which was situated on a railroad branch line with slower speeds. Small-town passengers had to get to depots in places like Ponca City and Hutchinson, Kansas, to hop aboard larger trains, which would go virtually anywhere in the country.

That’s where the doodlebug comes in. It carried passengers to and from the bigger towns on a daily basis. “Those branch lines didn’t need a full-fledged passenger train,” said local railroad history enthusiast John Mallory. “So, you used doodlebugs.” How the motor cars got the nickname “doodlebug” is somewhat of a mystery. Some historians believe the cars were unofficially named after real insects called doodlebugs. The motor cars, like the insects, usually moved at slow speeds. Some even say the insects look like the motor cars. Though more popular than other rural trains, the doodlebugs weren’t the only form of passenger rail service in small communities.

Mixed local trains, which carried freight, had either a passenger car or caboose on the rear end. They gave passengers a lift to the end of the line. Even after doodlebugs were phased out, mixed trains continued to provide this kind of service for several years.

Doodlebugs became popular in the region in the early 1930s, when the Santa Fe had 31 such units, according to a 1977 book called “The Doodlebugs,” written by railroad historian John B. McCall.

Blackwell was served by two daily doodlebug routes. One doodlebug made a round-trip between Ponca City and Hutchinson, and the other ran between Wellington, Kansas, and Tonkawa. Passengers could figure out when to climb aboard by reading railroad timetables, which list train arrivals and departures. Timetables reprinted in McCall’s book show that the Ponca City to Hutchinson run started at 6:55 a.m. each day in Ponca City. It stopped in Blackwell at 7:35 a.m., Nardin at 7:55 a.m. and Deer Creek at 8:03 a.m. From there, it pulled into depots in several other communities before arriving at Hutchinson five minutes after noon. The doodlebug left Hutchinson at 1:15 p.m. and returned to Ponca City by 6:40 p.m.

‘IT WAS A THRILL FOR ME’

The Hutchinson to Ponca City route was the more heavily traveled of the two local routes. And for some Kay County residents, it was their first experience riding a train. At the age of 10, Janie McGaha rode the doodlebug by herself from her home near Deer Creek to Blackwell.

“It was a thrill for me,” McGaha said. “I didn’t venture out much. … I was surprised my folks even let me ride it.” Janie McGaha’s husband, Dayle, grew up in Blackwell. The former longtime publisher of The Journal-Tribune lived half a block from the railroad tracks. When he was a child, he waved at the doodlebug as it passed by his house. “I always kind of admired it from a distance,” he said.

In the late 1940s, Larry Crow, a founding member of the Friends of Nardin historical society, rode the doodlebug from Nardin to Blackwell. Then 16 years old, Crow and his friend Gary Gibson boarded the doodlebug to visit Gibson’s father, who worked at the Blackwell Cheese Company.

“We were the only passengers on it that night,” Crow said. “I don’t think very many people rode it. But everybody who lived in Nardin always talks about the doodlebug. “It’s just exciting for a young boy who had never been on a train. It’s kind of like riding the bus.” DOODLEBUGS GET SQUASHED As time went on, people began traveling more by cars and planes and less by trains.

The last doodlebug to operate on the Hutch-Ponca route, M. 180, was scrapped in 1958, Crow wrote in “The History of Nardin.” Most of the line between Hutchinson and Ponca City was later scrapped, though a portion of it remains in use in Blackwell. Less information is available about the Wellington-Tonkawa doodlebug route, which ended by 1955.

The portion of the line from Tonkawa to Blackwell was ripped up years ago, but the Blackwell Northern Gateway Railroad still operates the line from Blackwell to Wellington. Some doodlebugs were saved and are in operation at railroad museums. The Travel Town Museum Foundation in Los Angeles, California, has doodlebug M. 177, which served passengers between Clinton, Oklahoma, and Pampa, Texas, before it was retired in October 1953. While the doodlebugs that served the Blackwell area are gone, photos of them have been preserved in books like McCall’s.

One color photo in the book shows a doodlebug at the South Haven, Kansas, depot in 1961. Locally, scale models of doodlebugs are among model train enthusiasts’ favorite engines. Two members of the Ponca City-based North Central Oklahoma Model Railroaders Club own and operate scale models. Several local railroad depots once served by doodlebugs are still around, too.

The South Haven depot still exists, too, though it is no longer on railroad property. Though the doodlebugs have been gone for years, folks who climbed aboard say people today would enjoy the ride. As Janie McGaha said: “I think it’s something young people would be in awe at.”