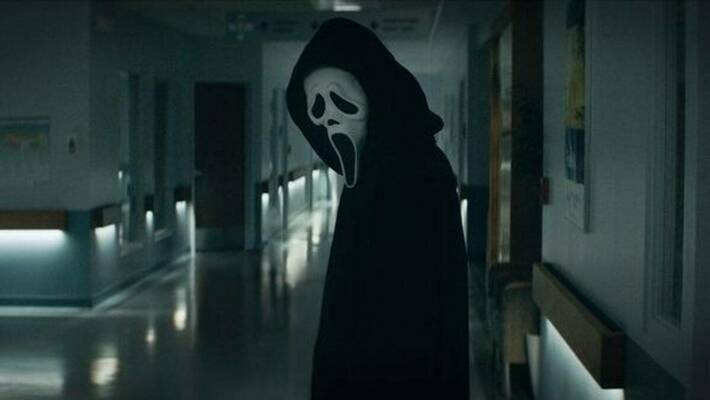 “I’ve seen this movie before.”

SCREAM, the fifth entry in Wes Craven’s long-running meta-horror-slasher series which began in the 1990s, released this past weekend on the way to collecting $50 million dollars globally off a meek $25 million dollar budget. SCREAM, like October’s HALLOWEEN KILLS or 2021’s A QUIET PLACE II proves if there’s one genre besides superheroes that audiences will brave the waning pandemic to see in theaters… it’s real crowd pleasers, like horror.

SCREAM opens in Woodsboro, CA with high schooler Tara Carpenter (You, The Babysitter star Jenna Ortega) home alone one Friday night when she gets a chilling call on her phone. Soon, she finds herself terrorized and attacked by the franchise’s key player, Ghostface, who hospitalizes her.

Tara’s runaway sister Sam (In the Heights’ Melissa Barrera), now working at a bowling alley far away with her sweet boyfriend Richie (Jack Quaid) is called back home to check in on her sister. Upon arriving back in her hometown, bodies begin to pile up as Sam realizes there’s more to these attacks than meets the eye … they’re all connected to victim’s of the original Ghostface massacre in the 90’s.

Who better to help than the experts?

Sam enlists the help of Sheriff Dewey Riley (David Arquette), Reporter Gale Weathers (Courtney Cox), and the “original” final girl herself, Sidney Prescott (Neve Campbell) to help track the new Ghostface and out an end to the madness once and for all.

Having only ever seen the original SCREAM, I didn’t consider myself an expert going into this new iteration. Thankfully, the slasher operates in a world where the in-universe events of the first movie were adapted into an in-universe franchise called “STAB”. In its own meta-way, the opening of this SCREAM fills the audience in on all the details through a creative little trivia game Ghosftace uses on Tara.

It’s a very, very, clever way to get the audience up to snuff and also sets the stage for just how funny and self-referential the film becomes. It’s very much a horror film with some popcorn-throwing moments, but it’s also a hilarious takedown of franchises, making it the perfect meta-companion to last month’s fourth-wall breaking MATRIX RESURRECTIONS.

“How can fandom be toxic?!” One character screams.

There’s a bit in the movie that even explains how cheap and iffy “legacy sequels” can be, referencing the latest Hollywood trend of “semi-rebooting” franchises like Ghostbusters, The Matrix, Jurassic Park, Star Wars, superheroes, etc. It’s a targeted takedown of “film fans” who hate anything new but don’t want anything old, the yin and yang of psycho internet fanboys and girls.

SCREAM is directed by Matt Bettinelli and Tyler Gillett, the duo that helmed the hair-raising “10 / 31 / 98” segment in 2012’s original VHS anthology film and, recently, 2019’s READY OR NOT for 20th Century Fox. This team understands house-hold horror, and they use their spacial awareness for some “gotcha!” jump-scares and clever fakeouts.

It also needs to be addressed just how good the Ghostface costume is in this movie.

Costume designer Emily Gunshor is quickly becoming the savior of modern horror costuming, with her work on the 2018 Halloween film and HALLOWEEN KILLS (and the best Michael Myers mask ever) is really put to great use here with how Ghostface looks.

The killer is imposing and haunting, with flowing black robes and sick boots. There’s a lot to say about how bitingly simple yet effective this classic costume still is.

If you’re looking for a horror film that will shock you as often as it will crack you up, SCREAM is exactly as the name implies, and it will leave you “Scream”ing for more.

SCREAM is playing in Ark City and at The Hub in Tonkawa.