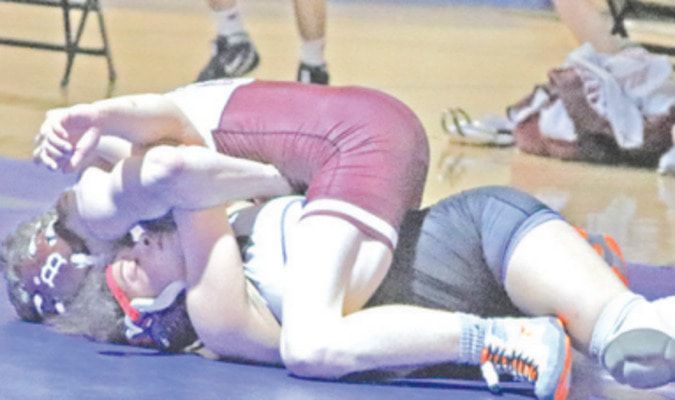 The Blackwell High School Maroons wrestling team traveled to Guthrie on Jan. 13 for a dual meet with a ranked Class 5A team.

The Maroons got a huge upset win by Kolby Looper at 220 pounds that would give the Maroons a 41-27 lead.

The Maroons had no heavyweight available so the final score would end up 41-33. Looper beat Hayden Simpson 7-2 in their match. Simpson who is a returning state qualifier and placed at the Fargo meet this summer and Looper were tied 2-2 in the third period, when Looper got a takedown that then turned into back points.

The five points stunned Simpson and Looper hung on for the huge win. It was only the second loss of the year for Simpson. The other match of the night was at 195 pounds were Kruz Goff tangled with Guthrie’s Coal Madison for the second time in five days.

The two wrestlers had just met in the finals of the Cushing Invitational on Jan. 8. Goff would make two takedowns stand up in posting a hard fought 4-2 win.

The Maroons win would get the team score to 38-27 with two matches to go leading into the Looper/Simpson match. The Maroons started the dual with a Louden Wolfe fall at 106 pounds at the 4:22 mark and a Guthrie forfeit at 113 pounds gave the visitors a quick 12-0 lead.

Kaiden Ailey (132 pounds) would then score a 12-3 major decision to get the Maroons lead out to 22-6 after the five lower weights. The Bluejays would start a mini comeback at 138 pounds with Braden Hall edging Kasen O’Dell 2-1, Jake Carey pinning Layne Looper, and Bryson Hall pinning Lawson Lusk to get the team score to 22-21 in favor of the Maroons. The Maroons Jason Osgood (160 pounds) and Christian Mora (170 pounds) would then get falls in 5:16 and 38-seconds respectively to expand the lead to 35-21 going into the final three matches.

Guthrie would get a 55-second fall at 182 pounds to close the gap to 35-27 setting up the final two matches of the night. Maroons would forfeit 285 pounds because of no wrestler available and the Maroons would post a huge 41-33 dual meet win. The Maroons are headed to Cascia Hall today for the district dual meet.

Cascia Hall is ranked #7 in Class 3A, with Blackwell ranked #3 and Chandler ranked #14. Should be a great meet. Prague, Victory Christian, Morrison, and Newkirk are also scheduled to be at the meet.

The winner advances to the state dual meet in Enid on February 11-12. Marlow, who is ranked #2 in the state has already qualified for the dual state sweeping their district meet 6-0 on Jan.11.