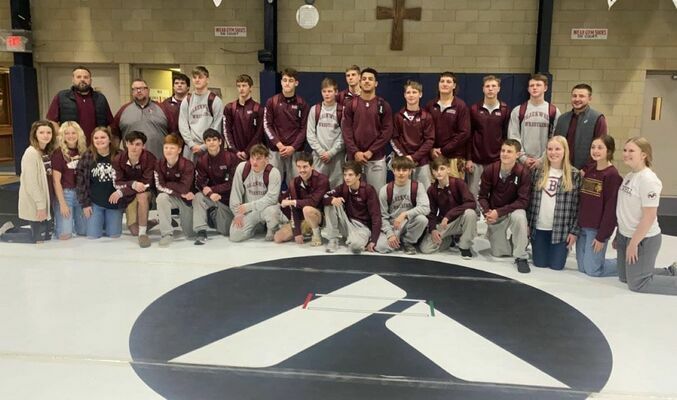 The Blackwell Maroons had a very busy wrestling week and when all the dust settled, they had earned another trip to the Class 3A Dual State Meet in Enid on February 11-12 and finished in fourth place at the Owasso Ram Dual meet on Jan. 21-22. The Maroons are now 13-4 on the season.

They wrestled Newkirk last night and travel to Ark City on Thursday night before hosting the Big 4 tournament this weekend. In the district dual meet on Jan. 19 at Cascia Hall in Tulsa, the Maroons beat Cascia Hall 54-18, Prague 84- 0, Morrison 71-6, Chandler 66-6, and Victory Christian 84-0 to win the district.

The Maroons are currently ranked third in Class 3A and will join #1 Jay, #2 Marlow, #4 Vinita, #6 Bridge Creek, and #10 Pawnee/Hominy in Enid. District 3A-5 with Comanche, Sulphur and Plainview, and District 3A-6 with Inola, and Salina still have dual meets to finish up to determine who is going to Enid.

The Maroons then traveled to Owasso on Jan. 21-22 for the Ram Duals where they wrestled six matches in the two days and while they finished 3-3 on the weekend for fourth place, they took on some tough talented teams that will prep them for the post season.

The Maroons started with a 64-15 over Claremore in a dual that saw the Maroons post wins in 11 of 14 weights. Senior Christian Mora had a 50-second fall to lead the way as the Maroons posted falls in eight of their 11 matches.

Friday’s third match of the day was against Bixby, the #5 ranked dual meet team in Class 6A and the Maroons would fall 52-22 to end their day.

Bixby would then get falls at the next six weights to take a 36-18 lead. Mora would lose a sudden victory 6-4 decision at 170 pounds and a Maroons forfeit made the score 45-18. Goff would get the Maroons final points with a 13-4 major decision to make the score 45-22. Kolby Looper would lose a 3-1 decision on a tiebreaker-1 and J.D.

McCleary would lose a major decision for the final Bixby points and a 52-22 loss. The Maroons would beat Salina 41-26 in the quarterfinals of the bracket round Saturday morning. The match would start at 126 pounds with Salina getting a fall and an early 6-0 lead. Kaiden Ailey would score a major decision at 132 pounds to get the score to 6-4. Salina would then win,138 pounds (tech Fall), 145 pounds (decision).

The Maroons would pick-up forfeits at 106 and 195 pounds, a fall at 120 pounds, a major decision at 285 pounds and decisions at 182 and 113 pounds to post the 41-26 win. The Maroons would run into the juggernaut from Allen, Texas (enrollment around 5,000 students) in the semifinals and lose 55-10. Goff, Wolfe, and Aiden O’Dell (major decision) were the only winners for the ten points.

The Maroons gave up five falls, a tech fall, a forfeit, two major decisions, and two decisions in surrendering a season-high 55 points. The Maroons would then drop the third-place match to defending Class 6A champion Mustang (3,100 students) 47-29 to finish off their weekend. Wolfe got the Maroons going with a fall at 106 pounds and an early 6-0 lead. Mustang falls at 113 and 120 pounds gave them a 12-6 lead.