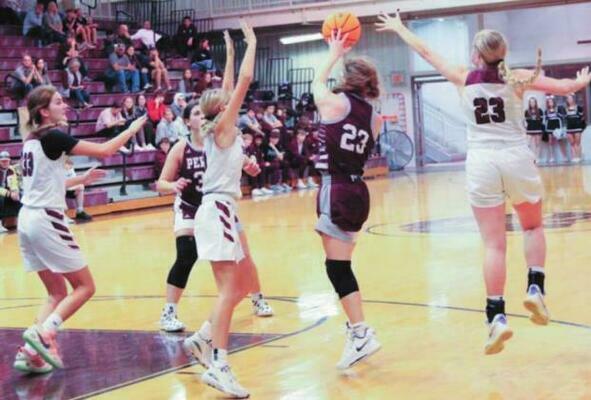 The teams traveled to Enid on Jan. 18 to play Chisholm and then played three games in Tonkawa over the weekend as part of the NOC Tournament that had a little different format this season.

The Lady Maroons went 2-2 on the week. The lady maroons would beat Woodland 30-28 and Coffeyville, Kansas 44-37 in Tonkawa. The losses were a 24-21 loss to Pawnee in Tonkawa and to Chisholm 62-42. In the Woodland win, the Lady Maroons had a strong first half leading 23- 15 and then hanging on as they would score only seven points in the final 16 minutes of the game. The difference in the game was the three point shot as the Lady Maroons were 6-for-23 in the game and Woodland missed all 11 of their shots. Natasha Hindman led the way with ten points and six rebounds.

In the Coffeyville win, the Lady Maroons again jumped out to a big lead with a 27-13 in the first half.

Coffeyville would win the second half 24-17 but the Lady Maroons hung on for the win. There were 30 personal fouls called in the game, but neither team could capitalize at the free throw line as Blackwell was 9-for-16 and Coffeeville was 11-for-18 from the stripe. Kellyn Botts led the way with 12 points Hindman had eight points and five rebounds, Bree Rowe had seven points and six rebounds, and Raven Gummow chipped in with seven points.

The first game of the tournament was against Pawnee and with the score tied at 9-9 at the half something had to give in the second half. Pawnee won the third quarter 14-12 and the Lady Bears held the Lady Maroons scoreless in the fourth quarter to secure the win. Each team had 20 turnovers in the game and there was one free throw shot for the entire game. The teams combined for 8-for-35 from beyond the arc. Hindman led the way with 12 points and seven rebounds. In the Chisholm game on Jan. 18, the home team outscored the Lady Maroons 24-5 in the third quarter to secure the victory.

Chisholm led 25-23 at the half. The game had a disparity in free throws as Blackwell was 3-for-7 and Chisholm was 14-for-21 in the game. Chisholm made 14 of their 15 field goals were on shots within three feet of the basket.

Rowe led the way with 12 points and Hindman chipped in with 11 points and eight rebounds. The Lady Maroons (6- 10) have six games left before district play begins Feb. 18-19 that includes two games with Tonkawa and a season ending game against #3 Perry, who just beat Dale for the County Line Championship in Cashion.