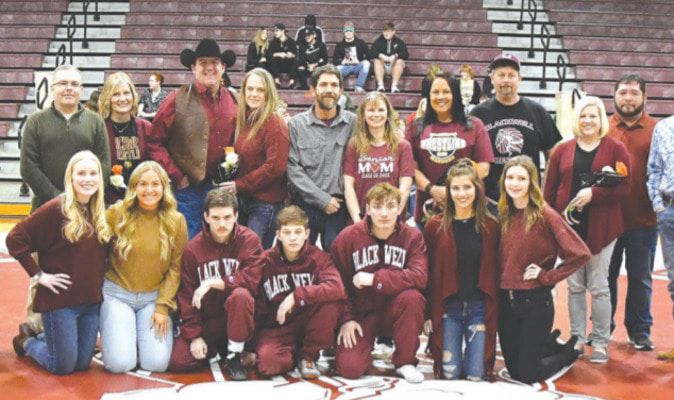 The Maroons then hosted the normally tough Ark City team and dispatched them 72-6. The Maroons were 15-4 going into last night’s dual meet. The Maroons were ranked No. 1 last week but are now at No.2 behind Marlow and ahead of Jay by a point.

As of press time the teams are ranked in the following order: Marlow, Blackwell, Jay, Bridge Creek Vinita, Pawnee/Hominy, Comanche, and Salina. Brackets are not out yet, but if all stays the same, the Maroons will probably draw Comanche on Friday afternoon in the quarterfinals.

The 3A quarterfinals start at 12 p.m. The Maroons finished up their tournament season hosting the Big4+4 Tournament last weekend. There were only seven teams in the tournament due to multiple issues. The Maroons would finish in fourth place, as the Maroons held out all of their freshmen so that they could participate in the junior high state championships this weekend, where seventh, eight and ninth graders are allowed to wrestle.

Choctaw, Ponca City, and Westmore finished ahead of the Maroons. In the tournament it was strictly a round robin tournament this year, which allowed most wrestlers to get five matches in. Jaxson Brown (106 pounds) would finish in third place going 3-2 on the weekend. Brown had two falls in his three wins but lost on a tech fall to Christopher Kiser of Ponca City and on a fall to Etan Thomas of Choctaw.

Aiden Godbehere (113 pounds) placed second going 2-1 on the weekend, losing to Devon Miller of Westmore 3-1 in the finals. Beau Murphy (120 pounds) had a rough weekend going 1-4 in the tournament and finishing fifth.

Aidan O`Dell (120 pounds) finished in second place going 4-1 on the weekend. O’Dell’s lone loss was to Westmoore and had two falls among his four wins. Kaiden Ailey (126 pounds) would finish in third place with a 3-2 record.

Ailey lost his first two matches and bounced back with a tech fall and two major decisions to take third place.

Kasen O’Dell (132 pounds) finished in fourth place as he beat Brian Ballard of Coweta with a fall in his opening match and then struggled losing his last three matches of the weekend.

Zane McDonald (138 pounds), Lawson Lusk (145 pounds), and Oscar Liatrache (182 pounds) struggled giving up falls in 12 of the 13 matches they were involved in. Christian Mora (170 pounds) would lose his opening round match to Kaleb Owen of Perry 3-1 on a sudden victory tiebreaker and would end up in second place winning his final four matches with two falls and a major decision.

Kolby Looper (220 pounds) would end up in third place going 3-2 on the weekend.

Looper lost his first match on a fall and then bounced back with decisions over Coweta and Ponca City before losing to another Choctaw wrestler and then beating Darius Allen of Ponca City on a fall-to-end his tournament.

It should be a heck of a weekend in Enid for the Maroons.