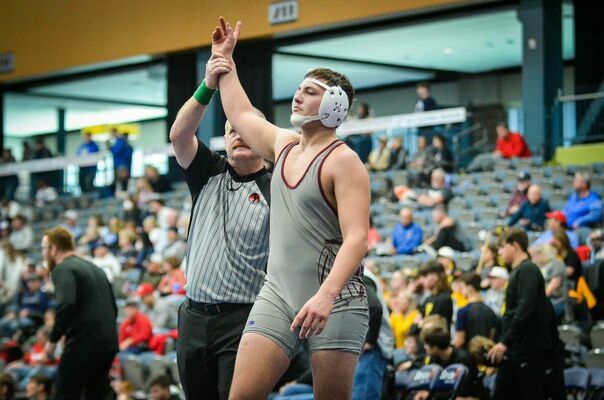 The Blackwell High School Maroons went into last weekend’s Class 3A state dual Meet as the #3 seeded team after being bounced around by the coaches’ rankings in recent weeks at #1 and #2.

The 2021 runners-up had a strong sea-son entering the tournament with a 16-4 record with all the losses to Class 6A schools. The Maroons drew the #6 seed Salina in the quarterfinals, a team they had just beat at the Owasso Ram Duals 40-26 on Jan. 22.

Salina had other aspirations this time around and had an upset on their mind through the first half of the match. The meet started at 132 pounds as determined by blind draw prior to the championships. The Maroons forfeited 132 pounds to start the match and a Kasin O’Dell decision made it 6-3 after two weights.

Those would be the last points of the day for Salina whether they knew it or not. Salina forfeited 195 pounds and Kolby Looper got a huge 5-2 decision at 220 pounds to get the comeback started and it was 29-12. J.D. McCleary got the Maroons first fall of the afternoon at 285 pounds in 2:32 and Salina forfeited yet another match at 106 pounds to make the score 29-24.

Aiden Godbehere (113 pounds) pounded out a 10-2 major decision over Aaron Blevins and the Maroons were with-in a point at 29- 28.

Aiden O’Dell was next at 120 pounds, and he just missed out on a major decision winning 10-3 to give the Maroons a 31-29 lead and a 30-29 when the mat official took a team point for unsportsmanlike conduct.

That left it up to Kaiden Ailey at 126 pounds. Ailey pinned Brandt Phelan at the four-minute mark and the Maroons had escaped with a 36-29 win and a date with #2 Jay Saturday afternoon. The Maroons got themselves in a hole again on Saturday but this time the #2 ranked Jay squad held them off 51-30. ending the Maroons dual season at 17-5. The dual started at 113 pounds and Godbehere got the Maroons off to a great start with a fall in 4:47 for an early 6-0 lead. Surprising the meet went from bad to worse after that as the Maroons would surrender falls at 120,126,132,138, and 145-pound matches and it was suddenly 30-3.

Jason Osgood (152 pounds) stopped the run pinning Kobe Warren in 1:53 to make the score 30-12. Jay got yet another fall at 160 pounds and Christian Mora bounced back from a disappointing match on Friday with a fall in 2:50 to make the score 36-18, but the Maroons were running out of weight classes for another comeback.

Another Jay fall at 182 pounds made it 42-18 and Kruz Goff picked up his second forfeit of the weekend to close the gap to 42-24. The Maroons and Jay would exchange forfeits at 285 and 106 pounds and Kolby Looper lost a tight 4-2 decision at 220 pounds to make the final score 51-30. “We were a little rusty with no competition in the ten days prior to the championships. It was disappointing against Jay to be ahead at the time they got most of those pins and it turned out to be a 36 point swing.

They went for broke, and it worked. We have bounced back with maybe our best practice of the year on Sunday. We are a better tournament team than a dual team and we will be ready for this weekend in Plainview,” said Maroon Head Coach Connor Cline.

The Maroons head to the Plainview regional Friday where they will battle Marlon, Perry, Pawnee, Comanche, and a host of other schools for spots in next weekends state championships in Oklahoma City.