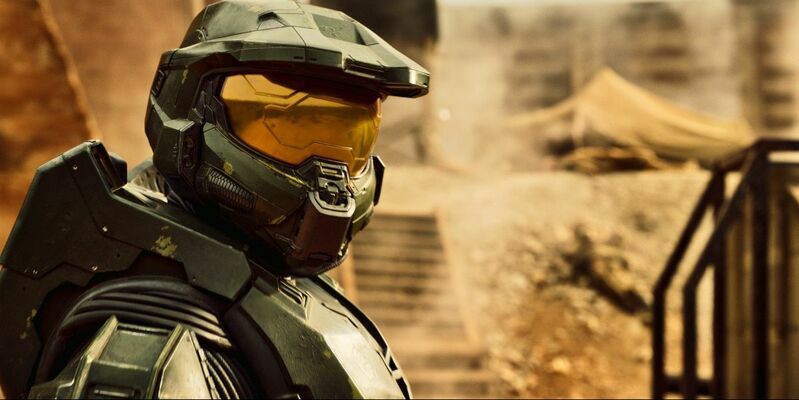 “There’s a difference between Spartans and marines. Marines can be killed. Spartans aren’t human. They’re faster, stronger, smarter. They cannot be stopped. They just keep killing without mercy until there’s nothing left to kill.”

Last week saw the long-gestating live-action adaptation of the hit Xbox video-game franchise HALO come to life on the Paramount+ streaming service, delivering the highest ratings for the streamer in history, surpassing blockbusters like “1883”, “Star Trek Picard”, and “Mayor of Kingstown”.

The series, based off the high-concept science fiction world crafted by Bungie for 2001’s hit video game “Halo: Combat Evolved” takes place in a distant future plagued by economic and civil unrest, controlled by the United Earth Government (UEG) who seek to control anti-government insurrectionists that operate via guerrilla war tactics to defend their backwater mining planets from the government’s control.

The series opens on the planet Madrigal where freedom fighters are swapping stories about The Spartans, genetically engineered and heavily armored super soldiers that are used by the UEG to wipe out and control the defiant populace. Soon, however, the miners on Madrigal are faced with a threat far beyond humanity’s own.

A bloody and hellacious attack is carried out by an alien force known as The Covenant who lay waste to the poorly armed populace before dropships burst into orbit and a Spartan squadron descends to battle the alien threat. These Spartans are lead by the Master Chief, a stoic and deadly operator who is known by the Covenant as “The Demon” and by the insurrectionists as a monster.

Following the attack, Master Chief approaches a cave where the Covenant had landed and discovers ancient ruins underneath, touching an artifact and triggering a seismic EMP blast that floods him with memories of a past life and a new purpose.

What is “The Halo”? What do the Covenant want? With humanity on the brink of war with a threat they don’t understand, will they be able to control Master Chief to do their bidding, or will he be the one man that can save our race from extinction?

HALO is based on a science-fiction property spanning umpteen books, two anime features, a live-action streaming movie, several comic books, and 9 videogames over the last 20 years.

Smartly, this live-action franchise is not based within that continuity, which at this point would require a PhD and fourteen tabs of Wiki pages to comprehend. Instead, Paramount’s HALO series is a clean-slate that requires no prior knowledge to get into.

The first episode, now streaming on Paramount with new episodes released every Thursday, established the key players and the tone of the action series very well. It’s fast, bloody, and engaging and we get glimpses of a larger conspiracy at play with the United Nations Space Command (UNSC) Military and the Office of Naval Intelligence (ONI) as well as Doctor Halsey’s agenda with the Spartan Program.

Master Chief is played by AMERICAN GODS and DEN OF THIEVES star Pablo Schrieber who has the hulking presence and gravelly voice fit for the video-game icon and brings some glimpses of gravitas and emotion to his performance.

One fantastic touch in the first episode of HALO is Master Chief taking the sole survivor of the Madrigal massacre, a young girl, on his ship to be interrogated on Reach which is where the nasty and shady political plays of this universe come to light.

The girl, Kwan, played by Yerin Ha, is frightened of Master Chief not only due to his stature and presence but the fact he was responsible for assassinating her mother, an insurrectionist political leader. Chief initially breaks the tension by joking that he “eats nuts and bolts”, like a robot.

The attempt at humor is meant to be awkward, but it’s great to see that kind of side of Master Chief, a character that took 4 games to actually emote anything substantial. It is soon followed by Kwan confronting Chief about his murder of her mom, which he laments by saying that his orders come from above, and he only sees things “on the ground”, where he is programmed to react.

It’s a simple answer with deep ramifications about how the Spartans process their morally gray missions, lending to more internal conflict with Chief later that episode.

Of course, the main question is how does the series translate to the screen, visually? The good news is that the world looks very similar and excitingly different from the one video-game fans might be used to. We see the doomed planet Reach, basically humanity’s far-space capital, and it looks jaw-dropping.

The Spartans themselves are intimidating and imposing figures that come off as Robocop-esque programed murderers with their features hidden behind reflective visors. They move quickly and efficiently, and their prowess is showcased in their opening battle against the Covenant forces.

The armor work and costuming done on the Spartans is impressive, to say the least. It seems that this is one case where the production design took some cues from Halo’s dedicated and insanely talented cosplay community in terms of molding the weapons and armor pieces to look enough like the game to be recognizable, but different enough to be somewhat realistic.

The human colonists- or insurrectionists- on Madrigal are almost tribal, and that gives them a sort of dangerous and other-wordy look in contrast with the sleek surroundings of the UNSC offices with their tailored and pressed uniforms.

Taking a que from the classic trope of “hardened warrior adopts young, cute, sidekick” made famous by films like LOGAN and TV hits like Disney’s The Mandalorian, HALO seems to be setting itself up as a fun, violent, space adventure that lets us navigate a tumultuous world wrought by galactic civil war and, from the previews of the rest of the season, will let us dig into the psyche of the Spartans and learn more about this world than ever before.

HALO seems to be continuing a trend of impressive video-game adaptations following last month’s UNCHARTED feature film and coming ahead of HBO’s prestige drama based on Sony’s “The Last of Us” videogames.

HALO is streaming on Paramount+ with new episodes on Thursdays.