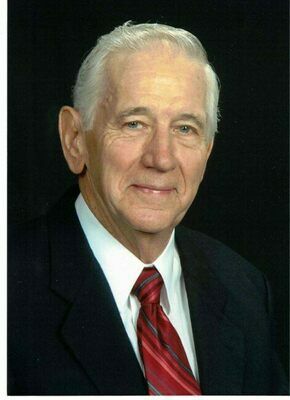 Larry Lee Davis, 92, of Prairie Village, Kansas peacefully passed from this life to the next on April 7, 2022. Larry was born on December 3, 1929 in Hunter, Oklahoma to Walter Ellis and Mabel Florence (Murray) Davis. He had one sibling, Ray Davis.

His family moved to Blackwell, Oklahoma where he graduated from high school in 1949. Larry attended the University of Oklahoma, where he was a member of the Delta Chi fraternity.

He served the United States Army in Korea beginning in December, 1953 and continued serving in the Army Reserves until July, 1960.

On June 16th, 1958, he married the love of his life, Marilyn June Cummings. He and Marilyn moved to Ponca City, Oklahoma, where their sons, Drew and Dirk, were born. Later, the family moved to Wichita, Kansas, where Larry worked as a machinist for Cessna, Beechcraft and Boeing.

Larry’s work ethic was shaped by the era in which he grew up. He was diligent in his responsibility to his employers, his family and his church. In addition to working whatever hours were necessary, he was happy to volunteer when needed as a Boy Scout leader, church usher, and many other ministries as the need arose.

He also loved to serve as the primary driver, fire builder and laborer on annual vacations which created lasting memories for his two sons. Following his retirement from Boeing in 1995, he enjoyed many traveling adventures with Marilyn as well as volunteering with the Hearts in Hands ministry at Central Community Church in Wichita. He delighted in the births, achievements and graduations of his grandchildren and ever-increasing number of great-grandchildren.

The number of people Larry did not like throughout his entire life could be counted on a single hand. Late in life, Larry would often repeat the phrase, “If I can’t have fun, I don’t want to go.” Although he experienced some memory impairment as he aged, it did not diminish his positive outlook on life. His desire to make others feel at ease and to give of himself lasted until the very end. His example will never be forgotten.

Larry was preceded in death by his parents, Walter Davis and Mabel Davis, as well as his brother, Ray Davis.

Larry is survived by his wife of nearly 64 years, Marilyn June (Cummings) Davis, two sons, M. Drew Davis of Ozark, MO and Dirk B Davis of Prairie Village, Kansas, and by his eleven grandchildren and twenty-one great-grandchildren.

Larry has gone on to meet his Savior whom he pursued, and he will be remembered fondly with a smile and a laugh by all who knew him.

A luncheon will be held at Central Community Church following the graveside service.

Fond memories and expressions of sympathy may be shared at www.ResthavenMortuary-Cemetery.com for the Davis family.