Review: SONIC 2 is a thrill for fans, families, and audiences 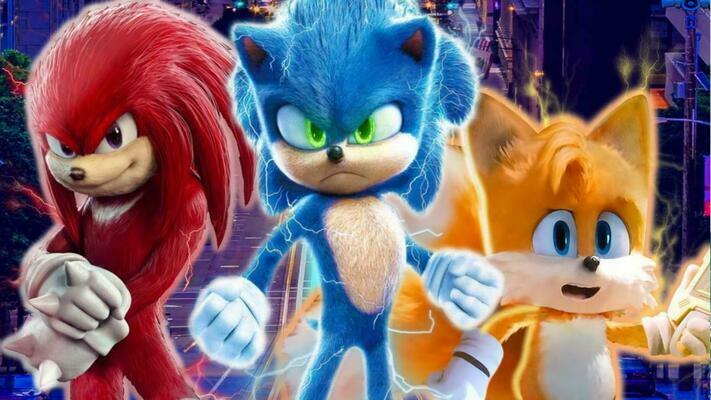 “You forgot one. Unstoppable.”

This month saw the long-awaited released of SONIC THE HEDGEHOG 2, the smash-hit sequel to the surprise 2020 blockbuster adaptation of the long-running videogame series “Sonic The Hedgehog” from SEGA.

Releasing only weeks before the coronavirus pandemic of 2020, the first Sonic movie went through online hell after a reviled teaser trailer showed off Sonic’s movie design. Paramount took the film back to the drawing board, and spent half a year or so on completely revamping Sonic’s look, leading to the film striking a chord with not only audiences but critics as well.

Now, our speedy blue hero is back and better than ever...and he’s brought some friends along for the ride.

In SONIC 2, we find our hero (voiced again here by Ben Shwartz) adjusting to his new life as a vigilante, helping to fight crime around the northwest from his base in Green Hills, Montana. With his foster parents (a returning James Marsden and Tika Sumpter) going to Hawaii for a wedding, Sonic thinks his little staycation is going to be all fun and games...until Doctor Robotnik (Jim Carrey) shows up with a vengeance.

At his side is an Echidna warrior named Knuckles (Idris Elba) who aims to defeat Sonic, and accepts help from Robotnik in an uneasy alliance to find Knuckles’ birthright, The Master Emerald, an ancient artifact that can provide the wielder with limitless power.

Assisting Sonic is Miles “Tails” Prower, a two-tailed fox who has been watching Sonic from across the universe. Tails arrives just in time to save Sonic from Knuckles and Robotnik, and soon the race is on to stop this deadly duo from taking over the world.

SONIC 2 definitely took some notes from complaints that the first film wasn’t “Sonic enough” as an origin story. This time around, videogame fans and children will be delighted to see the iconic trio of Knuckles, Tails, and Sonic at possibly their best ever with another manic laugh-a-minute performance by Carrey as the antagonist, still as animated as ever at age 60.

As a Sonic fan all my life, I loved the first movie and found this one to be, somehow, even better. The Knuckles character is played by an impressive commitment by Elba, and given his best characterization in years since his videogame introduction. Knuckles is a man on a mission, and his thick-headed drive offers some truly laugh-out-loud moments.

Tails, Sonic’s lovable and cuddly buddy, is voiced by the character’s longtime video-game voice actress Colleen O’Shaughnessey which is a credit to Colleen’s years of service and to how well she can play with the big dogs like Elba, Schwartz, and Carrey.

The main theme in SONIC 2 is “working together” and being honest with your friends. We see Sonic and Knuckles butt heads (literally and figuratively) over a battle that started years before either of them were born. It is this generational trauma that bonds them and molds them into the protective fighters they are today, and this is ultimately how the two become friends by the finale’s end.

Tails tells us he was mocked on his home planet for being born with two tails (this is a hilarious gag when the two first meet) and his heart is warmed by Sonic becoming such good friends with him. By the film’s climax, the trio learn that they are stronger together rather than being apart, and this gives audiences a full-tooth grin of an action sequence that is lifted directly from the 2000’s game “Sonic Heroes”.

I cannot say enough good things about this movie, and I can honestly say that the post-credits scene made me almost scream with pure excitement.

There is something here for everyone, and it is a pure example of a “family film”. I saw this in a theater full of kids, and when the final battle plays out with Sonic going “Super Sonic” the joyful energy in the room was palpable to say the least.

Fans of the games will not be disappointed, as the film lovingly recreates most of “Sonic 3 & Knuckles” including the snow-boarding segment and the Labyrinth Zone level, just to name a few instances. Fans of the “Sonic Adventure” entries will also be over the moon by the inclusion of G.U.N. (another hilarious gag) and the hint at a fan-favorite character who is sure to make the already greenlit “Sonic 3” film a masterpiece.

SONIC THE HEDGEHOG 2 is currently playing in Ark City and will debut on the Paramount+ Streaming Service May 24.