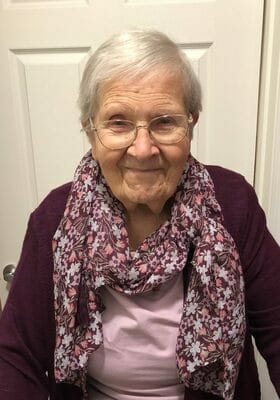 While being a homemaker and raising the children, Ruth volunteered in PTA and Girl Scouts of America, both in Kansas. After the family moved to Blackwell, Oklahoma in 1971, she volunteered in Boy Scouts, Campfire Girls, Meals-on-Wheels program, local Blood Drives and at the local Contact Point Ministries, helping serve meals to the community every year at Thanksgiving and Christmas.

Ruth’s employment opportunities included serving as Secretary of Blackwell’s First United Presbyterian Church; Outreach Worker for Contact Point Ministries; Case Coordinator for Wheatheart Nutrition, and Manager of Equity Plaza Apartments prior to her retirement in May, 1999.

She loved to sing and shared her gift as a soloist in area churches. She also participated in choirs including Wheatheart Sweet Adelines and area churches and community choirs.

In July, 1994, Ruth had the opportunity of a lifetime, to travel to Israel, where she was baptized a second time in the Jordan River, one of the highlights of her life. She was a long-time member of First United Presbyterian Church, Blackwell.

Ruth was preceded in death by parents; her sister, June Busch; daughter and son-in-law, Janet (Roger) Epperly, and Richard DeYoe.

The family wishes to extend their heartfelt gratitude to all the staff at Shawn Manor Nursing Home and Humanity Hospice of Ponca City. Your love and compassion for Ruth “Ruthie” went above and beyond not only caring for her, but also her family.

In lieu of flowers, donations can be made in Ruth’s memory to Shawn Manor Nursing Home, 2024 Turner, Ponca City, OK 74604, to help support the staff and patients that meant so much to her.

A Funeral Service will be held at Roberts and Son Funeral Home, 120 W. Padon, Blackwell, Oklahoma, on Saturday, April 30, 2022, at 2 p.m. with Robert Vickery officiating. Visitation with the family will be at 1 p.m. at the funeral home prior to the service. Interment will follow the service at Prairie Lawn Cemetery in Wellington, Kansas.