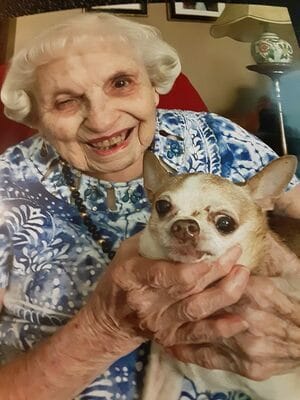 Oklahoma.  Her parents were John Peter Gartner and Rosa May Gartner

She departed life from her earthly home April 7, 2022.  She was raised on

District #15 which was located one mile north and one mile west from her home.

Newkirk, Ok her freshman and sophomore years.  Since two trips a day were

taking too much time out of a farm workday, her grandparents Mr. and Mrs.

Newkirk. That summer Braman voted to buy school buses so her parents

brought the girls home and they rode the bus.  Their second home those last

two years of High School was with Mr. & Mr. A.D. Garrison in Braman,

Ok.  Mrs. Garrison made many delicious meals when Vera needed to stay

in Braman for any evening school activities. From graduation in 1943 Vera

came into Blackwell where she started working for Southwestern Bell

She married Sgt. Alfred Hackler on September 25, 1945 in San Luis

Obispo California where he had just returned from W.W.II in Europe and

was awaiting orders to ship to W.W.II in the Japan area.  Peace was

signed and the wedding was moved to California.  This marriage lasted 28

They had two sons, the oldest, Dennis Wayne Hackler was born November

very special to their mother.

membership in Vernon Chapter No. 424 of Vernon, Texas from April 1962

Women until it disbanded.  She served on the Decorating Committee several

years and a year as Treasurer.

She was an employee of First National Bank of Blackwell, Ok from 1980

She was a lifetime Volunteer at Blackwell Regional Hospital.

She was a member of the First United Methodist Church in Blackwell.

She married Chester Wilkey in 1989 and was married for 22 years.

of Yulee, Florida, many cousins and a special cousin Nancy J. Fetters.  She was

so very kind and did many things Vera appreciated so much.  A special survivor is

She was preceded in death by her parents, sister Norma Jean Sapp, 3 nephews