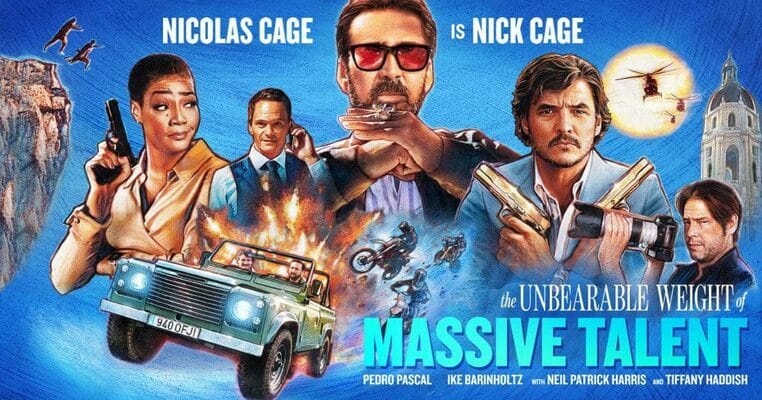 “What is your favorite movie?”

“You know, that’s one of those questions that’s just impossible to answer. You can’t limit it to just one.”

This month saw the release of the gonzo action-comedy THE UNBEARABLE WEIGHT OF MASSIVE TALENT, a meta film about Nicolas Cage (played by, who else, Nic Cage) who is a struggling actor looking for his next big role and up to his neck in debt when, courtesy of his agent (Neil Patrick Harris), he gets the offer of a lifetime- $1 million dollars to attend a superfan’s birthday party in Spain.

Upon arriving, Cage meets Javi (Pedro Pascal) and soon finds himself recruited by two CIA agents (Tiffany Haddish and Ike Barenholtz) who reveal to him Javi is a cartel crime lord responsible for the kidnapping of a presidential candidate’s daughter. Now, Nic Cage must put his full arsenal of acting talent to the test as he has to save the day...for real.

MASSIVE TALENT is a bonkers movie that very easily could have succumb to it’s own SNL comedyskit setup and been an eye-rolling dud.

What it is, instead, is a surprisingly emotional film about reckoning with one’s life choices and becoming a better person. It is also a charming buddy comedy, and a fantastic acting showcase for Cage and relative newcomer Pascal who TV fans will recognize from his stint as The Red Viper Oberyn Martel in HBO’s “Game of Thrones” and as the titular Mandalorian in the Disney+ series.

There’s a running theme throughout MASSIVE TALENT of misconception and preconceived notions of who someone is. Cage comes off (in real life and the film) as a sort of wild-card and eccentric human being.

In the film, he’s just a parent struggling with relevancy and with his relationship concerning his 16-year-old daughter and ex-wife. Likewise, Javi is a sweet and soulful man who is the unwilling face of a cartel operation. Javi, in the end, is just a man in love but too afraid to do anything about it.

Early in the film, Javi tells Cage that he can’t quit acting, like he wants to, because his acting talents are what bring people so much joy. Javi is a dedicated Cage fan, with an encyclopedic knowledge of the actor and a shrine room dedicated to him with memorabilia from films like THE ROCK, MANDY, NATIONAL TREASURE, FACE / OFF, and more. But it isn’t just Cage’s films that Javi loves- it’s what they meant to him.

At a dinner party, just after Cage is tasked with infiltrating Javi’s cartel compound server room for the CIA, Javi tells the crowd that he and his estranged father mended their relationship on the man’s deathbed by bonding over a childhood favorite of his, Nicolas Cage’s 1994 comedy-thriller GUARDING TESS.

Javi jokes up recounting the story of watching the movie with his dad on the small hospital room TV, and it is a fantastic moment for Pedro Pascal, but even better for the audience.

This scene is crucial to understanding why MASSIVE TALENT works as a film. It is a fun movie an inoffensive crime-buddy comedy and a surprisingly reflective glimpse at the psyche of Nicolas Cages.

But it is most importantly a movie about why we love movies. Why we have favorite actors. Why we associate films and these actors with specific memories in our lives.

I can’t tell you the date that I met my best friend or the day I got my first car, but I can sure as hell tell you the release date and the emotions I felt watching a specific movie that meant a lot to me.

I can tell you how it felt for us all to be connected.

MASSIVE TALENT ends with a hilarious bang to cap off a great movie, and in doing so we see our characters have succeeded. There’s no cynicism in this movie, although it very well could have been that kind of film, but I don’t think that’s what the writer was going for.

It is a very genuine movie that has no qualms or reservations about what it sets out to do, and perhaps that means more than anything. Also, it has the longest F-bomb in film history, so that’s worth it alone.