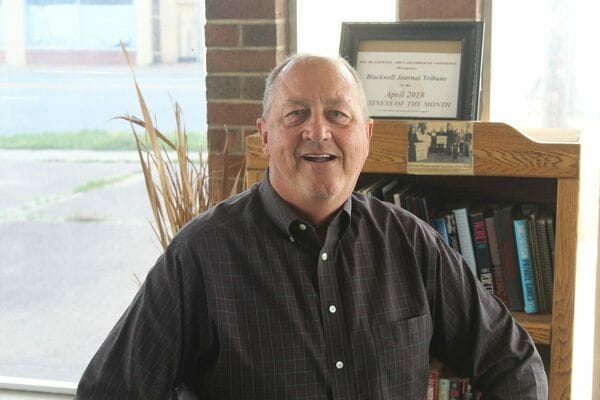 EDITOR’S NOTE: This story is the second in a series profiling candidates running for the Kay County District No. 3 Commissioner’s seat. The series began in the April 27 edition. The Journal-Tribune will discuss more candidates in stories before the June election.

Kent Field said he’s a man who believes in Kay County, and as a first-time politician, he also believes he’s the right man to bring the Kansas-bordering county into a new era.

That’s why he’s running for the Kay County District No. 3 Commissioner’s seat. “I was born and raised here,” Field said.

“I lived here my entire life until I spent 15 years in Indiana, where I went to college and worked. After that, I came back here to the place I was from and started working for farmers, including the Kahle Corp. I have 30 years’ experience in fleet management, and I know how important rural business, agriculture and community is to the working families and industry that are here.”

“Ever since I was young, I have had nothing but respect for those in our local offices,” Field said.

“I always looked up to them as being leaders for our community, especially in the county offices. I have always followed the politics of the county commissioner's office, so I’m no stranger to that.”

Field is a member of the Immanuel Baptist Church in Blackwell with his wife, Lynne, who is a teacher at Blackwell Middle School and a member of the Blackwell Tourism group. As a husband, Kent said he sees the work his wife does in the community, and he praised her as part of his inspiration to see Blackwell and Kay County prosper.

“We need to think longterm for Kay County,” Kent said. “We need to look at flood management, roads and start to lay a better foundation for our future. Business is important as well, of course, and that will come in right off the interstate once we have that foundation. Once we establish our longterm goals, then people will want to be a part of that.”

Field addressed the concerns of many in the area, speaking about Hubbard Road, which has been closed since a 2019 flood. “Hubbard Road is vital,” he said.

“That connects directly to I-35, and we of course need to look into fixing that and establishing that crucial line from the interstate into our county.” Kent is a graduate of Northern Oklahoma College, the University of Oklahoma and the Indiana University-Purdue University Indianapolis.

“I have family here,” Field said. “I have a life here. Of course I want to see Kay County succeed. I think we all do.”