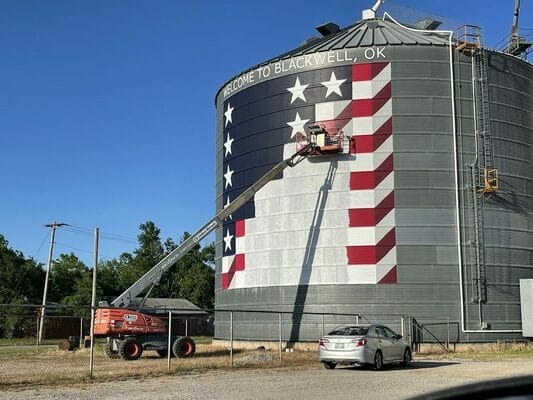 Curious Blackwell residents might have noticed MainStreet’s latest colorful addition on a grain silo next to the Farmer’s Co-Op Elevator: a gigantic barn quilt-style interpretation of the American flag.

But how exactly did it come to be?

“Simon lives in Talala, Oklahoma, a small town with a population of 270, which is located northeast Tulsa in Rogers County. “He is a degreed building inspector contracted with some smaller towns, allowing flexibility in his schedule to pursue his passion of painting and photography. Williams wanted to add this huge mural to his portfolio, as he’s never done anything quite like this before. The variety of his work, including his favor for painting portraits, can be found on his website www.colorviewportraits.com."

Blackwell’s Top of Oklahoma Barn Quilt Trail was established in the fall of 2017 as a joint effort from the Blackwell Tourism Development Board, Top of Oklahoma Museum and other boards and volunteers from the community.

The Top of Oklahoma Barn Quilt Geo-cache Trail was created in 2018 and brings many visitors from other states each year.

“Each of the 50 states is represented in our barn quilt trail, and it just made sense to add a huge Americana quilt mural to compliment the existing barn quilt trail,” said Buellesfeld, who has served as the tourism board’s part-time secretary since September.

“Three patterns were presented to the Tourism Board to choose from for the final design.”

“Looking back, I’ve found that past board president Dewayne Muret first proposed the idea of a mural on the Co-op’s grain bin in May of 2019,” Buellesfeld said.

Daniel Koelsch, general manager of Farmer’s Coop, Inc., sought approval from his board of directors back then, and they granted permission to provide the “canvas” for the mural.

“I contacted Daniel to make sure the agreement was still valid and was thrilled to find out it was,” Buellesfeld said.

“Bids were submitted from three muralists for the board’s consideration, and Simon Williams was chosen.”

Blackwell Tourism receives funding from City of Blackwell through the hotel tax to promote visits to the city. In addition to the barn quilt and geo-cache trails, other projects the Blackwell Tourism board has been a part of include: providing Christmas decorations on Main Street and at the Event Center, hosting the Independence Day fireworks display, seasonal street banners, the skate park, SUTU walls, donations for the American Flag on Doolin Avenue, distribution of promotional and advertising materials at Travel OK days, shows and other tourism-related activities.