For 45 years, The Friends of Nardin have kept history alive 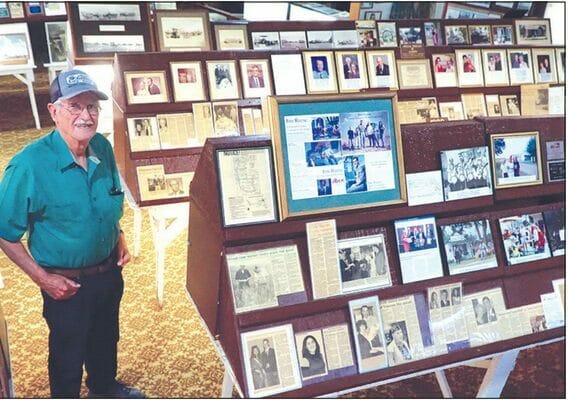 The small Kay County town of Nardin may be only a few blocks wide, but its history is longer than a country mile. For 45 years, Larry Crow and the Friends of Nardin have been keeping that history alive.

Standing in the Nardin Heritage House – a church building that dates back to the late 1800s – Crow gazes at years’ worth of newspaper clippings and black-and white photographs that line book shelves and cover the walls.

Those pictures show generations of Nardin residents, some of whom helped start the Friends of Nardin, the historical organization that’s hosted the annual Nardin Heritage Parade and Celebration for more than four decades. Now in its 45th year, the organization’s mission to preserve Nardin’s past, present and future is still going strong, said Crow, the group’s president.

The next heritage celebration begins May 28 at 9:30 a.m., and he hopes this year’s turnout is the biggest yet.

“History’s important, and we’re just a small Oklahoma town trying to survive like all of them,” Crow said. “We’re just trying to keep the town from becoming a wheat field.” Nardin has gotten small- er through the years, and the community of roughly 50 people is surrounded by cropland. Its roots date back to the land runs of the late 1800s, when settlers staked their claims across the West. Many of the community’s founders lived well into the 1970s when a historical “bug” bit Crow – metaphorically speaking.

The Blackwell JournalTribune published a photo of Nardin’s Main Street, circa 1905, in 1976 to commemorate America’s Bicentennial. The black-and-white photo showed businesses lining both sides of the street, and it piqued Crow’s interest.

“I thought, ‘Wow, I never knew Nardin was that large,’” said Crow, who has lived in Nardin for most of his 92 years. “I said, ‘I wonder what stories those buildings could tell.” That photo – a copy of which hangs in his home – prompted him to start interviewing longtime residents. They provided photos and stories about the town’s earliest days and people. Crow compiled that information in a two-part book, “Nardin, I Knew You When,” copies of which are available at local libraries.

The photos he collected are now displayed among the hundreds of historical items in the Heritage House, which serves as the town’s museum and is maintained by the group. Crow was already re-searching and writing his book when he started the Friends of Nardin with the help of other community members.

The first heritage celebration took place in May 1978. It was meant to help reconnect Nardin residents who’d moved away, Crow said. The original event line-up included a parade with a handful of vintage cars and tractors. It’s only grown since then.

“Now, instead of home- town reunion, it’s more of a community celebration,” Crow said. “People come in that really like what we’re doing, but they didn’t really have any connection to Nar- din.” While the event has ex- and, the organization’s mission has stayed the same – mostly.

“We had two goals: to find and preserve the heritage of the area,” Crow said. “That is still the goal. The second was to promote the town and encourage it to grow. I’ve since changed that to make Nardin a nicer place to live. We can’t get to grow, but we keep things mowed up.”

Beyond mowing city parks and roadways, the group has built small buildings along Main Street that are used during the annual celebration.

The group has also preserved the town’s historic structures, including the former Pentecostal Church that Crow’s father preached at.

In the last year, the group raised $10,000 to put a new roof on it. “It’s a lot of work,” Crow said. “Lot of minor details have to take place. I’ve had tremendous help, oh my gosh. Workers on the food line, people cleaning stuff, mowing, painting – I want to stress that it’s a community effort.”

So have the folks who’ve supported fundraisers to pay for restoration work around town.

Of course, they can also find him at this year’s celebration, donning Western attire while visiting with the folks who make the celebration possible: the people who cook food for the event, organize the parade, paint historic buildings and tackle countless other tasks. “Large or small, it takes us all,” he said.

“Even if you just bake a pie, you’re still a part of it.”